Several hundred protesters gathered in front of the Egyptian embassy in Beirut Saturday to express their support for the Egyptian protest movement as President Hosni Mubarak appointed his intelligence chief vice president in an effort to quell the civil unrest sweeping the country. 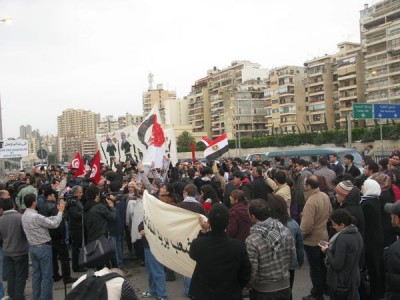 “The people want the regime to fall!” the protesters in Beirut shouted, echoing the chant that has become the rallying cry of the Egyptian revolt.

“I’m both happy and sad,” said Jamil Oueini, 29, who said he came to express solidarity with the Egyptian protesters. “I’m happy because I never expected to see this kind of evolution in my life, but I’m sad because I know there will be a lot of victims of this violence.”

Some demonstrators also held anti-Mubarak posters depicting the Egyptian president as a pawn of Israel and the United States.

“It’s the least we can do,” said Seif Hisham, a 30-year-old college professor. “I think we’re witnessing a new dawn in the Arab world, and its not a false dawn.”

At least 72 people have been killed in Egypt since the protests began, according to Al Jazeera, but government attempts to impose a media blackout have made the number of casualties difficult to confirm.

The massive protests in Egypt follow a successful movement in Tunisia to oust former President Zine el Abidine ben Ali. Protests have also broken out across the region in Yemen, Algeria and Jordan. LAT