by yalibnan
639
President Hosni Mubarak did not appear before Egyptians until late on Friday. Sombre and visibly tired he did nothing to quell the fury unleashed on the streets of the nation
Share: 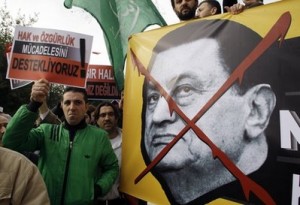 Hosni Mubarak did not appear before Egyptians until late on Friday, a day of escalating chaos and massive protests across the country calling on him to step down, and American pressure that seemed to be growing by the hour.

Sombre and visibly tired, Egypt’s president for the past 30 years did nothing to quell the fury unleashed on the streets of the nation since Tuesday’s first day of rage. His main, in fact only, concession was to dismiss his government, led by a technocrat charged with economic management who has little to do with politics.

No doubt he believed that making a scapegoat of the government would buy him time. He is probably trying to hold on until the presidential elections in September.

Analysts say the uprising sweeping Cairo and other major cities this week already makes it likely that this will be the last year of Mubarak rule, with no chance of either re-election or succession by his son Gamal. Theft argue that question now is whether the president can last for several months more.

As the numbers of protesters multiplied on Saturday, Egypt seemed to be approaching the end game. With the police retreating from the streets, and the army deployed everywhere but not hindering protesters, tens of thousands were rallying in Cairo and similar crowds protested in Alexandria.

Rumours of rifts between Mr Mubarak and the military were circulating in Cairo, and of the president scrambling to find anyone to fill the new government he promised. For some Egyptians a transition had already started, with the army’s role taking central stage.

“We’re approaching two choices,” Amr Hamzawi, analyst with the Carnegie Middle East Centre, said from Cairo on Saturday. “Either a package of significant reforms which Mubarak would have to announce today and include in it that he won’t be running in September and would be holding new parliamentary elections, or the situation goes in another direction, Mubarak is removed and the army puts someone else in or takes control.”

Osama el-Ghazali Harb, one of the politicians who have played a role in the uprising, said a political vacuum was emerging, with the army the only institution capable of filling it. “People are happy the army took over from the police but there are still doubts about what direction the situation is going,” he said.

Political forces and civil society groups, he said, were preparing to issue a statement that would underline that the only acceptable outcome of this crisis is a “total change of regime.” But opposition groups were also trying to organise themselves into a coalition so that they could negotiate with the army.

While Egyptians marched on to Tahrir Square, however, another threat was looming, as gangs of looters went on a rampage, breaking into shops in some Cairo neighbourhoods, and attacking police stations and government buildings. People were banding together to organise protection for their neighbourhoods, just as Tunisians had done two weeks earlier, when they rose against their ruler and forced his ouster.

Amr al-Shobaky, a political analyst, said the challenge today was to prevent what he said was organised looting, which could force the army into confrontations. “The army may have to repress some demonstrations, something which has never happened in Egypt, not even in the 1977 bread riots,” he said. Today, he said, the military had a “historic chance” to push for a democratic transition in a country where it has always ruled behind the scenes.

Photo: A member of a pro-Islamic group holds a placard that reads ” we support the struggle for the rights and freedom” next to a crossed-out poster of Egyptian President Hosni Mubarak as people demonstrate in show of solidarity with protestors in Egypt, outside the Fatih Mosque in Istanbul, Turkey, Friday, Jan. 28, 2011. (AP Photo/Ibrahim Usta)