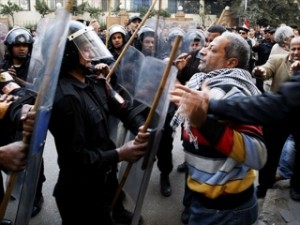 A policeman and a protester died in Cairo in a shower of rock-throwing between the two sides on Wednesday.

Police fired tear gas at hundreds of demonstrators and chased them through the streets of a popular commercial district, witnesses said.

Protesters responded by throwing rocks at police, damaging several shop fronts in an area near the information ministry.

There were also clashes as demonstrators pushed their way through a gate into the compound of the foreign ministry before being driven out with tear gas.

Protesters in the northeastern port city of Suez threw Molotov cocktails at a government building, setting parts of it on fire, witnesses said.

Others firebombed and occupied the headquarters there of the ruling National Democratic Party.

In clashes with police, who fired tear gas and rubber bullets at the crowds, 55 protesters and 15 police were injured, medics said on Wednesday.

And dozens were arrested in Egypt’s second city of Alexandria as they tried to reach a sea-front square to demonstrate, witnesses said.

The protests in the Arab world’s most populous nation, inspired by the groundbreaking ‘Jasmine Revolution’ in Tunisia, sent shockwaves across the region and Egypt’s interior ministry banned further demonstrations.

Despite the ban and a threat to arrest those who disobeyed, members of the pro-democracy youth group April 6 Movement, the driving force behind the unrest, said they would take to the streets.

‘We’ve started and we won’t stop,’ one demonstrator said.

‘To continue what we started on January 25, we will take to the streets to demand the right to life, liberty, dignity and we call on everyone to take to the streets … and to keep going until the demands of the Egyptian people have been met,’ the group said.

The pro-democracy group circulated SMS messages and posted appeals on social networking site Facebook for fresh demonstrations on Friday after the Muslim weekly prayers ‘to demand the right to live with freedom and dignity’.

Facebook said on Wednesday that it had not seen any major changes in traffic following reports it had been blocked in Egypt.

‘The Egyptian government has an important opportunity to be responsive to the aspirations of the Egyptian people, and pursue political, economic and social reforms that can improve their lives and help Egypt prosper,’ it said.

‘The United States is committed to working with Egypt and the Egyptian people to advance these goals,’ it added.

The statement also underlined US support for basic democratic freedoms ‘including the rights to freedom of expression, association and assembly’.

The protests are the largest in Egypt since bread riots in 1977, four years before Mubarak came to power.

Prime Minister Ahmed Nazif said the ‘government is keen to guarantee freedom of expression through legitimate means’, but did not elaborate.

Among protesters’ demands are the departure of the interior minister, whose security forces have been accused of heavy-handedness; an end to a decades-old state of emergency, which gives police wide powers of arrest and bans demonstrations; and a rise in minimum wages.

On Wednesday, Bahrain’s King Hamad telephoned Mubarak and called for Arab leaders to meet to ‘adopt a strategy on the future and progress of the Arab nation, in the interests of the Arab people, their security and stability’. Bigpond