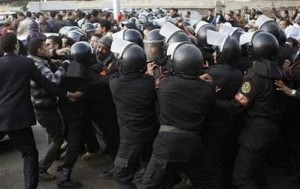 Egypt said on Wednesday it was banning demonstrations and quickly dispersed protesters who tried to gather, seeking to draw a line under unprecedented protests against President Hosni Mubarak’s rule.

Activists called on Egyptians to take to the streets again on Wednesday to end Mubarak’s 30-year rule after a “Day of Wrath” of anti-government protests across Egypt in which three protesters and one policeman were killed.

Police fired teargas and water cannon in the early hours of Wednesday to disperse protesters in Cairo’s central Tahrir Square. By daybreak, Cairo and other cities were calm. Police were deployed in large numbers around the capital.

Brief attempts by protesters to gather again on Wednesday outside a court complex in Cairo and in the industrial city of Mahallah el-Kubra were quickly broken up. In Tahrir square, police questioned and moved on anyone who appeared to loiter.

“No provocative movements or protest gatherings or organization of marches or demonstrations will be allowed, and immediate legal procedures will be taken and participants will be handed over to investigating authorities,” the state news agency MENA cited the Interior Ministry as saying.

Some 20,000 demonstrators, complaining of poverty, unemployment, corruption and repression and inspired by this month’s downfall of the president of Tunisia, had turned out in cities across Egypt on Tuesday to demand that Mubarak step down.

“To any free and honest citizen with a conscience who fears for his country, to anyone who saw yesterday’s violence against protesters, we ask you to pronounce a general strike across Egypt today and tomorrow,” one activist wrote on a Facebook site that has been used as a tool to marshal protests.

One opposition group, the Sixth of April Youth, called on its Facebook page for protests to continue on Wednesday “and after tomorrow, until Mubarak goes”.

A set of political demands were posted on Facebook and passed around Tahrir Square on slips of paper before police moved in.

They included the resignation of Mubarak and Prime Minister Ahmed Nazif, the dissolution of parliament and the formation of a national unity government. A labor union activist repeated the demands to the crowd in the square by megaphone.

About 40 percent live on less than $2 a day, and a third are illiterate.

Washington, a close ally of Egypt and a major donor, called for restraint. Secretary of State Hillary Clinton said Mubarak’s government was stable and seeking ways to meet Egyptians’ needs.

French Foreign Minister Michele Alliot-Marie said: “I think one must be able to demonstrate without there being violence and, much less, deaths,” adding that protesters had “an aspiration for more freedom”.

Tuesday’s protesters had chanted “Down, Down, Hosni Mubarak” and torn up pictures of the president and his son, Gamal, who many Egyptians believe is being groomed for future office, though both father and son have denied any such plan.

“Change must happen. It must,” said a butcher in central Cairo who asked to be identified simply as “an Egyptian”.

Prince Turki al-Faisal, a former Saudi intelligence chief and ambassador to Britain and the United States, told Reuters Insider Television the future of Mubarak’s government depended on its ability to understand the reasons for the protests.

“Whether they can catch up as leaders to what the population is aiming (for) is still to be seen,” he said.

Twitter, the Internet messaging service that has been one of the main methods used by demonstrators to organize, said it had been blocked in Egypt.

“The difference is great between freedom of expression and chaos,” Safwat el-Sherif, secretary general of the ruling National Democratic Party, told the state newspaper al-Akhbar.

A government source said ministers had been told to ensure staff returned to work on Wednesday and did not join protests.

But the activists on the Web appeared determined to keep up their momentum.

“Tomorrow, don’t go to work. Don’t go to college. We will all go down to the streets and stand hand in hand for you our Egypt. We will be millions,” wrote one on Facebook.

The Internet has been the main platform for some of the most vociferous criticism of Mubarak.

The complaints echo those of fellow Arabs in Tunisia: soaring food prices, a lack of jobs and authoritarian rule that usually crushes protests swiftly and with a heavy hand. 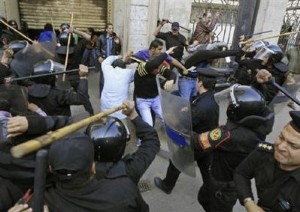 Tuesday’s coordinated anti-government protests were unlike anything witnessed in Egypt since Mubarak came to power in 1981 after president Anwar Sadat was assassinated by Islamists.

The Interior Ministry blamed the Muslim Brotherhood for Tuesday’s violence, although the banned Islamist opposition group has only played a small part in protests and has even angered its own youth members by not being active enough.

Analysts say protests in Tunisia and developments across the region have given the lie to the claims of many Arab autocrats that they are bulwarks against Islamist radicals sweeping to power. Reuters