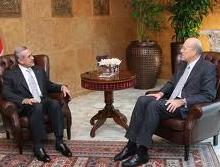 Sources close to Speaker Nabih Berri said that Amal Movement and Hezbollah held urgent contacts and agreed to leave things to the Army and not to confront supporters of the Future Movement.

Berri reportedly questioned all the fuss over nominating former PM Najib Mikati and wondered what would have happened if former PM Omar Karami was nominated instead.

Berri revealed that Mikati once officially designated will form a national salvation government instead of a national unity government, after the announcement of the Future Movement and the March 14 that they will refuse to join any government that is not headed by Hariri .

Caretaker PM Saad Hariri decried the myth that Mikati is a consensus candidate. He said on Monday that “ all the talk of a compromise candidate is an attempt to throw dust in the eyes…. there is no such thing as consensus candidate ….. there is a candidate named Hariri, another candidate that is backed by March 8 and the choice in this area is very clear and unambiguous”.

Hariri said the Future Movement will refuse to participate in any government headed by the candidate of March 8 stressing that the period preceding the indictment in the assassination of martyr Prime Minister Rafik Hariri is one thing and the period that follows will be something else, and what is before the parliamentary consultations is something, and what is after the consultations is something else.

Earlier reports revealed that Lebanese president Michel Suleiman will not sign off on any one color government that does not include all Lebanese factions .

The decision to name former PM Najib Mikati was reportedly made in Syria.

The Syrian leadership reportedly informed the envoys of Hezbollah and Amal of its decision to nominate Mikati Saturday night, according to local reports .

According to reports the Hezbollah led opposition received Mikati’s assurance that he will implement a five-point plan before agreeing to Syria’s decision to name him as their premiership candidate.

The five point plan calls for:

1- Withdrawing the cooperation protocol between Lebanon and the Special Tribunal for Lebanon STL) .

2- Withdrawing the Lebanese judges from the STL

3- Halting the funding of the tribunal

4- Referring the false witnesses file to the Lebanese judiciary council 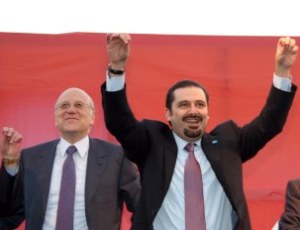 Mikati was a staunch ally of Hariri during the 2009 parliamentary elections ( see picture) . His change of position has puzzled some Sunnis.

“In this time of crisis and amid political struggles occurring on the ground, I decided that there must be a project to save the country,” Mikati said at a news conference Monday.

Mikati dodged a question on the 5-point plan issue on Monday, but observers believe that Hezbollah would not have supported Mikati’s election without a guarantee that he would discredit the tribunal.