Gemayel: Use of force by March 8 never worked in Lebanon 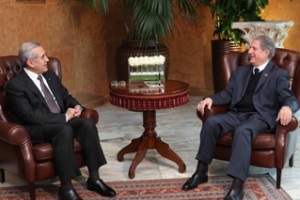 “The use of force by the ( Hezbollah-led ) March 8 coalition never succeeded in Lebanon.

He said what really matters now is the success of the parliamentary consultations away from pressure and threats.”

Gemayel explained that the nomination of Prime Minister Saad Hariri by March 14 to form the upcoming cabinet is “based on the 2009 parliamentary elections that gave us the majority.”

Many fear the political crisis could lead to street protests and violence .

Following the announcement by the Special Tribunal for Lebanon that Prosecutor Daniel Bellemare has handed the indictment to STL’s pre-trial judge , Hezbollah supporters wearing black and clutching hand-held radios quietly gathered around Beirut … an innocuous yet threatening display by the country’s most powerful armed force. Many parents picked up their children from school as word spread of the gatherings.

In a sign of just how high tensions are running, Wiam Wahhab, a pro-Syrian politician, warned security troops not to use force against demonstrators or they will face the same fate as Tunisia’s former President Zine El Abidine Ben Ali, who was deposed last week.

The move brought down the unity government and further polarized the country’s rival factions: Hezbollah with its patrons in Syria and Iran on one side, and Hariri’s March 14 majority bloc on the other.

The U.S. has called Hezbollah’s walkout a transparent effort to subvert justice.

The court is widely expected to accuse members of Hezbollah of being involved in former PM Rafik Hariri’s killing, something the militant group has insisted it will not accept. The Iran- and Syria-sponsored group says the tribunal is a conspiracy by Israel and the United States.

Canadian prosecutor Daniel Bellemare said in a video statement Tuesday that the confidential indictment was an important moment for the people of Lebanon, the international community and “for those who believe in international justice, ” and r warned against speculating about the sealed indictment