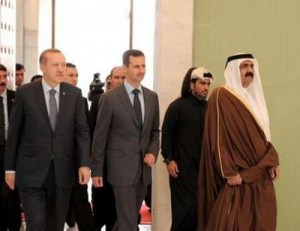 The leaders of Turkey, Qatar and Syria started Monday their trilateral summit in Syria to discuss the political crisis in Lebanon, in the wake of the collapse of Beirut’s unity government, Syrian media reports said.

On January 12, the opposition militant Shiite Hezbollah bloc withdrew from the unity government amid tensions over the United Nations-backed investigation into the 2005 assassination of former premier Rafik Hariri.

Tensions have been high in Lebanon amid reports that the UN-backed tribunal planned to indict members of Hezbollah.

Earlier Monday in Beirut, Lebanese President Michel Suleiman postponed parliamentary negotiations on the naming of a new premier to allow time for Arab efforts to solve the political turmoil in the country.

‘The consultations were postponed until January 24 and 25 after all factions agreed on it,’ a statement from the presidential palace said.

Suleiman had been scheduled to begin discussions with the various parliamentary blocs on Monday with the aim of naming a new premier, who will be tasked with forming a government.

Monday’s postponement was to allow time for the talks between the Turkish, Qatari and Syrian leaders in Damascus, a government source said.

Their aim is to find a way to bring the rival Lebanese factions to agree on a solution that will end the political impasse and spare Lebanon from street violence similar to that which occurred in 2008.

In May 2008, Hezbollah and their allies clashed with followers of then premier Saad Hariri, a Sunni Muslim, over a government decision to dismantle Hezbollah’s private telecommunications network. More than 80 people were killed in the violence.

A deal brokered in Qatar was reached eight days later, ending the violence.

Lebanese Justice Minister Ibrahim Najjar earlier announced that a draft indictment from the tribunal investigating Hariri’s murder was due in the course of the day. DPA