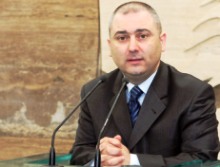 Elie Mahfoud , leader of the Change Movement and member of the March 14 coalition said during a press conference that the term “caretaking” does not apply to the 11 ministers who resigned from the cabinet because they resigned on their own ”

He added : On the other hand the remaining 19 other ministers are “caretaking ministers”, Mahfoud said , adding that the Finance Ministry should therefore terminate the payroll of the 11 resigned ministers effective January 12, 2010.

He also added that the ministries of Defense and Interior should withdraw the military members assigned to protect the resigned ministers because the latter are now regular citizens.

Lebanon’s president asked Hariri to stay on as caretaker prime minister on Thursday after Hezbollah ministers and their allies resigned in a dispute over an investigation into the killing of Hariri’s father. A statement issued by President Michel Suleiman called on the government to “continue in a caretaker capacity until a new government is formed”.