Syria pressuring Jumblatt to side with opposition 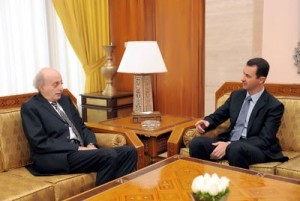 The meeting according to SANA focused on the latest developments in Lebanon and the region.

The two leaders stressed the importance of being aware of foreign intervention, calling for decisions and solutions to be in the hands of the sons of the region.

According to observers Jumblatt with his defection from March 14 got himself into a big mess and there is no one to blame but himself .

Prior to heading to Damascus , Jumblatt met with Caretaker PM Saad Hariri . Hariri according to sources told Jumblatt: “They want me to surrender and present concession after concession … on top of that they have a gun pointed to my head,” he was quoted as saying.

Hariri also reportedly told Jumblatt that the opposition cannot be counted on in respecting agreements, as proven through its violation of the Doha agreement when the opposition ministers resigned from Cabinet.