Mrad: What matters now is getting rid of this government 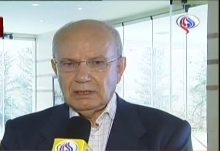 Former Defense Minister Abdul Rahim Mrad said in an interview with Ash-Sharq al-Awsat newspaper published on Friday that the (Hezbollah-led March 8) opposition has not yet asked him to head the new cabinet.

“We tried Prime Minister Saad Hariri and we only saw crises,” he said , adding, “It is time for a new capable Sunni figure to head the government.”

“What matters now is getting rid of this government, ” he added

Reports circulated yesterday that March 8 coalition MPs will nominate Mrad , a staunch ally of Syria for the premiership.

There were also reports that Hezbollah is thinking about forming a separate cabinet if it does not succeed in getting its own man to lead the national unity cabinet, similar to Hamas did in Gaza.

During an interview with MEMRI TV last October Mrad said: “The so-called 9/11 ( September 11, 2001 attack ) incident is a big lie, which was used by the Americans as a pretext to stage a global offensive, beginning in Afghanistan, continuing in Iraq, and God knows where it will go from there. ”

Lebanese premier and current Future Movement parliamentary bloc leader MP Fouad Siniora, told Al Arabiya TV on Wednesday evening : “Based on all available data there is no substitute for Saad Hariri to head the new government.”

Lebanon’s president asked Saad Hariri to stay on as caretaker prime minister on Thursday after Hezbollah ministers and their allies resigned in a dispute over an investigation into the killing of Hariri’s father. A statement issued by President Michel Suleiman called on the government to “continue in a caretaker capacity until a new government is formed”.

Hezbollah according to reports has someone else in mind to lead the new government . Hezbollah MP Mohammed Raad unveiled on Thursday that the March 8 forces will name a personality with a history of national resistance to head the new government . Raad told reporters after meeting former President Emile Lahoud in response to a question on who will that be : “A personality with a national resistance biography, ” Raad said.