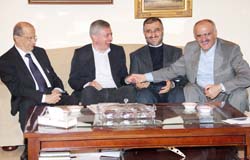 As Safir newspaper which is closely linked to Hezbollah has reported that the Hezbollah-led opposition met last night for the second time at the residence of Amal Movement MP Ali Hassan Khalil to discuss steps the opposition will be taking following the resignation of their ministers from the cabinet .

“The opposition ministers have agreed to resign. Their resignation will be announced tomorrow Wednesday ” a senior March 8 source told The Daily Star Tuesday night. He said 11 ministers are set to quit, which would automatically lead to the resignation of the Cabinet.

the resignation of the opposition ministers will coincide with the summit meeting at the white House between Lebanese PM Saad Hariri and US president Barack Obama.

PM Hariri said during an interview with the Al-Hayat newspaper that was published on Friday that the Saudi-Syrian (S-S) agreement on reducing tension in Lebanon had been finalized a long time ago, even before King Abdullah , traveled to New York for the treatment but blamed Hezbollah and its March 8 allies for not living up to their end of the deal.

” This is the major base of the Syrian-Saudi efforts”. Hariri stressed.

Hariri said he decided to break his months-long silence to defend the Saudi-Syrian process against a campaign aimed at distorting it. “I have kept silent for months. Now, I have broken silence just because I am responsible and concerned with protecting this process in the interest of the country and its stability.”

Hariri did not reveal the details of the Saudi-Syrian deal, but his political adviser, Mohammad Shatah, said during an interview on Friday that the Saudi-Syrian deal is aimed at achieving stability in Lebanon, by taking specific steps to reduce political tension, such as restoring contacts between Lebanese factions, ensuring that state institutions return to serving the public and following up on the issue of Lebanese-Syrian ties.