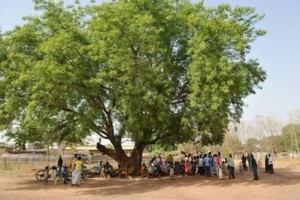 According to Col. Philip Aguer, a southern Sudan military spokesman, several truckloads of heavily armed nomads ambushed a convoy of 23 vehicles carrying southern Sudanese, who were returning home on Monday to vote in the referendum. Beyond the 10 civilians killed in the attack, 18 civilians were injured and their belongings were looted, he said.

“Ten people die, is that not a threat to security?” said Colonel Aguer. “We have to wait and see what this is, but it’s a big problem.”

The attack on the convoy of voters followed skirmishes over the weekend, when more than 40 people were killed in the same general area along the north-south border. It has yet to be demarcated and is home to some of Sudan’s more lucrative oil fields.

“There is an evident increase in tension,” according to an internal United Nations memo. “The situation is volatile and there could be outbreaks of further violence.”

Southern Sudanese officials have blamed militias from the Misseriya community, who traditionally roam back and forth across the north-south border in search of grazing land for their animals. The Misseriya are aligned with the northern government in Khartoum, Sudan’s capital, and they claim the disputed area of Abyei, along the border, as their own.

Misseriya leaders have recently denied that they were the aggressors in the attacks over the weekend and said that southern Sudanese soldiers fired the first shots, on Friday.

“After the attacks happened,” said Sadig Babo Nimir, a Misseriya leader who spoke by telephone from Khartoum, “the people began to retaliate.”

It seems that Misseriya militias are shaping up to be potential spoilers in the process of splitting the country in two, or at least that is the growing perception of them in southern Sudan. Otherwise, the referendum has been going well.

On Tuesday, voters lined up once again before sunrise to cast their ballots, which will decide if the southern third of Sudan stays part of Sudan or breaks off and forms its own country, which is the most likely outcome.

Election observers said voter turnout was on track to clear the 60 percent threshold necessary to pass the referendum, along with a majority vote. The voting continues for the rest of the week and election officials have extended the polling station hours to accommodate the flood of people eager to vote. NYT