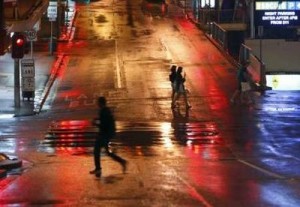 Thousands of Brisbane residents were today stockpiling food and stacking sandbags or fleeing their homes as the worst floodwaters to hit Queensland for 50 years surged towards Australia’s third-largest city.

Many people in the state capital, fearful of the damage already done by the water, appeared to have heeded the authorities’ evacuation warnings.

By tonight, Brisbane city centre was a ghost town populated only by a few shopowners hoping to save their businesses with last-minute barricades of sandbags and plastic sheeting.

Ten people died yesterday as cars and pedestrians were swept away in an “inland instant tsunami” that sent a wall of water coursing through the city of Toowoomba, west of Brisbane.

More than 40 people were pulled from rooftops by military helicopters that were still searching for 78 missing people today. Another 200 Australian Defence Force personnel are being dispatched to southern Queensland, which has been declared a disaster area.

The flooding has claimed 14 lives in the last two weeks, but police fear the death toll could rise significantly as the bodies of people who may have drowned in their cars and homes are found.

From Toowoomba, 600 metres above sea level, the water flowed down the Lockyer Valley and is heading towards Brisbane.

The Brisbane river, which runs through the city – home to 2 million people – has already broken its banks in some areas, and residents of low-lying neighbourhoods have been leaving their homes.

The city authorities have warned that about 30,000 homes are facing flooding, with 9,000 at risk of “serious inundation” when the floodwaters peak on Thursday.

Queensland has been in the grip of floods – blamed on a La Niña weather pattern in the Pacific – for several weeks, and an area the size of France and Germany has been affected.

The state premier, Anna Bligh, said people in Brisbane and the surrounding areas were “facing their greatest threat in more than 30 years” – a reference to the 1974 flood, which caused widespread damage.

“We are now in a very frightening experience,” she said today. “Can I appeal to everybody that, at times like this, we need to all make an effort to stay calm, to be patient and to stick together.”

Bligh urged people to check on family and friends and offer shelter to those forced from their homes.

With around 1,500 people sheltering in evacuation centres in Brisbane and neighbouring Ipswich, and water released from nearby dams added to the surge, the city’s mayor, Campbell Newman, said the situation had “obviously demonstrably deteriorated” and warned that worse was to come.

“Today is very significant, tomorrow is bad, and Thursday is going to be devastating for the residents and businesses affected,” he said.

As the constant rain pushed river levels still higher and water crept up to the steps of the Queensland state library, workers in the centre of Brisbane abandoned their high-rise offices, while shoppers thronged a supermarket in the west of the city that had already sold out of bread and vegetables.

At a nearby Sunshine Coast zoo founded by the late television star Steve Irwin, staff were tying up the crocodiles in case they escaped in the deluge.

Tonight, a steady stream of people arrived at the evacuation centre in Brisbane’s showground, only a few minutes drive from the swollen river.

“I’ve lived in Brisbane for 18 years and I’ve never seen anything like this,” Chris Moxam, 24, from Newfarm – one of the areas emergency services have listed as at risk of flooding – said.

“I evacuated after I saw the TV pictures of what happened in Toowoomba. Everywhere in my suburb is at risk.”

Although more than 80 people had registered at the evacuation centre, a huge, warehouse-like complex that can house 1,000 people, the Red Cross said it was expecting more arrivals.

“We’ve got people coming from all parts of the city,” Julie Groome, a co-ordinator for the organisation, said.

Among the Brisbane residents who arrived at the showground were holidaymakers and homeless people with nowhere else to go.

The centre has showers and toilets, a children’s play area and even a place to accommodate pets. The Salvation Army is helping with catering, and there are chaplains on duty, as well as St John Ambulance workers, to help the new arrivals.

“People are concerned for their safety,” Vicki Cella, who lives in Brisbane and is at the centre as a counsellor for the community group Lifeline, said.

“Some of them don’t have cars, so they felt the need to come here because public transport is being shut down in parts of the city.”

As heavy rain pounded on the tin roof of the centre and some of the evacuees bedded down for the night on blow-up mattresses, Cella tried to sum up the mood in Brisbane.

“There’s a level of disbelief at the moment. It feels surreal,” she said. “We feel like we’re in a movie. We know we don’t know the full extent of it yet, but it’s like a bad dream.” Guardian