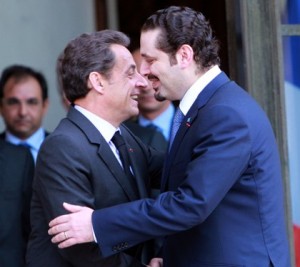 Sarkozy’s talks with King Abdullah will focus on regional issues including Lebanon, Iran, the Middle East peace process and the fight against terrorism, as well as bilateral French-Saudi relations, a member of Sarkozy’s entourage said.

His talks with Hariri will be “a continuation of the discussions he had with him last November 30 at the Elysée Palace over the situation in Lebanon and Lebanese-French relations,” the official said.

New York media leaks have revealed that the expected meeting between PM Hariri and Saudi King Abdullah has taken place with the two sides discussing all pending issues without exception, Central News Agency reported on Monday.

CNA added that the atmosphere during the meeting was positive.

US Secretary of State Hillary Clinton also met separately on Friday in New York with Hariri and King Abdullah to discuss the growing tensions in Lebanon.

PM Hariri will be returning before Wednesday because he has many meetings on his agenda, including the honoring ceremony of Arab tourism ministers on Wednesday and the welcoming of the prince of Monaco on Thursday., NBN TV reported on Monday

Saudi and Syrian officials have reportedly been working on a compromise that would resolve tensions in Lebanon over the imminent STL indictment . Reports say that the STL may soon indict Hezbollah members in its investigation of the 2005 assassination of former Lebanese PM Rafik Hariri, father of Saad the current prime minister.

PM Hariri said during an interview with the Al-Hayat newspaper that was published last Friday that the Saudi-Syrian (S-S) agreement on reducing tension in Lebanon had been finalized a long time ago, even before King Abdullah , traveled to New York for the treatment but blamed Hezbollah and its March 8 allies for not living up to their end of the deal.

” This is the major base of the Syrian-Saudi efforts”. Hariri stressed.

Hariri said he decided to break his months-long silence to defend the Saudi-Syrian process against a campaign aimed at distorting it. “I have kept silent for months. Now, I have broken silence just because I am responsible and concerned with protecting this process in the interest of the country and its stability.”

Hariri did not reveal the details of the Saudi-Syrian deal, but his political adviser, Mohammad Shatah, said during an interview on Friday that the Saudi-Syrian deal is aimed at achieving stability in Lebanon, by taking specific steps to reduce political tension, such as restoring contacts between Lebanese factions, ensuring that state institutions return to serving the public and following up on the issue of Lebanese-Syrian ties