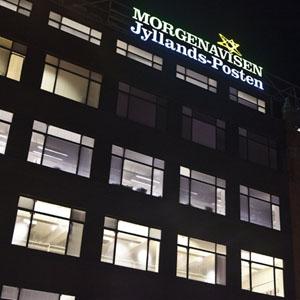 Denmark’s intelligence service says it has arrested four people plotting what it called an “imminent” terrorist attack against the Jyllands-Posten newspaper, which printed controversial cartoons of the Prophet Muhammad.

The head of the agency, Jakob Scharf, described some of the suspects as “militant Islamists.” He said the group had been planning to enter the newspaper’s building and kill as many people as possible.

Danish officials said the four arrested were a 44-year-old Tunisian, a 29-year-old born in Lebanon, an Iraqi asylum-seeker and a fourth whose origin was not yet clear. Three of them are residents of neighboring Sweden.

Police in Sweden arrested a fifth man, a Swedish citizen of Tunisian origin believed to be linked to the plot.

Danish and Swedish security officials said Wednesday they had worked in close cooperation to foil the terror plot.

Jyllands-Posten published cartoons depicting the Prophet Muhammad several years ago — sparking protests by Muslim communities around the world. There have been several attempted attacks against the newspaper and the cartoonist since then.

Swedish police said Wednesday’s arrests did not appear to be related to the December 11 bombing in central Stockholm, when a Swedish man of Iraqi origin killed himself and wounded two others. VOA