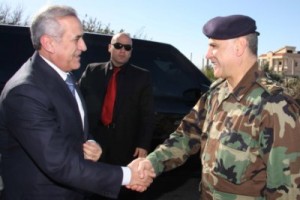 President Michel Suleiman visited south Lebanon and inspected the offices of the Lebanese Armed Forces (LAF) and UNIFIL troops in the South on Tuesday.

The president was accompanied by LAF Commander General Jean Kahwajid other high ranking officers when he visited the Lebanese army’s office in the town of Bayyada, where he met with with fifth brigade commander Brig. Gen. Bassam al-Daoud ( see photo) and several officers .

He then headed to UNIFIL headquarters in Naqoura to meet with the peacekeeping troops’ commander, General Alberto Asarta Cuevas. 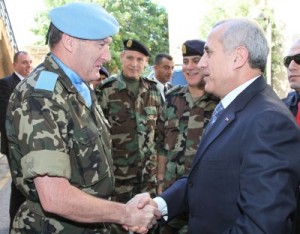 During his trip Suleiman called for for strengthening the LAF and added “the army, in collaboration with the Resistance, should be strengthened to confront the Israeli enemy.”

Asarta reportedly described the situation in the South as calm and briefed Suleiman on the work of UNIFIL, while Suleiman pointed out the importance of fully implementing UN Security Council Resolution 1701 and coordination between LAF and UNIFIL. He welcomed the president to UNIFIL, saying that his visit was “a demonstration of Lebanon’s support and commitment to United Nations Security Council Resolution 1701 and to our strategic partnership with the Lebanese Army,” according to a UNIFIL press release.

“The achievements reached so far are testament to the excellent relations and cooperation that exists between the Lebanese Armed Forces and UNIFIL,” the press release added quoting Asarta as saying.

The president then headed to Beirut following his visit

National News Agency (NNA) reported that Suleiman called for “ planning a national-defense strategy based on diplomatic and militarily abilities as well as the Resistance’s abilities to deter Israeli violations of water, gas and the telecommunications network…”

According to observers the purpose of the visit was to assur UNFIL that the state fully supports their peacekeeping role. This visit comes after several reports of clashes between the residents of south Lebanon , a Hezbollah stronghold and UNIFIL forces.

The most recent report of clashes was dated Dec 16 , when residents of south Lebanese village of Tayri, a Hezbollah stronghold clashed with a French UNIFIL patrol.

The incident reportedly took place as the UN Interim Force in Lebanon (UNIFIL ) patrol was conducting a GPS demarcation, according to the report

Another clash took place earlier the same day with a French UNIFIL patrol in the village of Hariss in the south Lebanon, another Hezbollah stronghold according to local reports.

“Some of these may have been something spontaneous in the street, but some were clearly organized,” UN special coordinator for Lebanon, Michael Williams, said last July

UN Officials said patrols by the UN Interim Force in Lebanon have banned from several Shi’ite villages in the south. They said Shi’ites have been attacking UNIFIL patrols in what appeared to be organized by the Iranian-sponsored Hezbollah.

“It is incumbent on the Lebanese authorities to ensure the security and freedom of movement for UNIFIL within its area of operation,” UNIFIL commander Asarta said last July following the clashes.

Since 2007, UNIFIL has deployed 13,500 troops in southern Lebanon in an effort to maintain the ceasefire between Israel and Hezbollah. Under the ceasefire, Hezbollah was prevented from restoring its presence south of the Litani River.