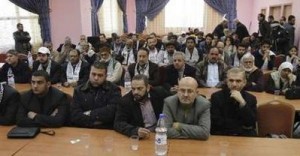 The Asia 1 Gaza bound convoy is waiting for Egyptian officials to permit their entry into the country.

Activists who joined the convoy said today on their online twitter account that Egypt is so far refusing to collaborate with the group.

The organizers wrote online that Egypt has so far not issued them visas to the convoy, which reached Lebanon yesterday.

An Egyptian official says that the papers submitted by Asia to Gaza were incomplete. However, no final decision has been announced and there is still room for paper completion, added the official under condition of unanimity.

The Asian aid convoy comprising politicians and activists from 18 countries, including Pakistan, Iraq, Afghanistan, New Zealand, Malaysia, Indonesia, Kuwait and the United Arab Emirates is on its way to Gaza in an attempt to break Israel’s four year siege on the Strip.

The convoy started off in New Delhi, passed through Iran, Turkey, and Syria and arrived in Lebanon on Friday.

It is planning to reach Gaza by end of December, in time for the second anniversary of Israel’s 22-day war on the Strip that started on 28 December 2008.

Approximately 1,400 Palestinians were killed and 5,000 injured or maimed in the three-week attack. Half of Gaza’s infrastructure was destroyed and remains unrepaired as a result of Israel’s siege, which bans the entry of building materials.

Photo: A group from the “Asia 1” convoy listens to Hamas leader Khaled Meshaal during his meeting with their group in Damascus December 22, 2010. The convoy of more than a hundred volunteers from several Asian countries arrived in Syria in a convoy as they travel to the Gaza Strip carrying humanitarian aid. The group is now waiting in Lebanon for an Egyptian visa to enter Gaza