“We are blessed that our Lebanese constitution does not bind us to implement Aoun’s fatwas, ” Zahra said in reference to Iran’s Wilyat al Faqih type rule

Aoun on Tuesday attacked Suleiman and Prime Minister Saad Hariri and accused them of obstructing the cabinet. 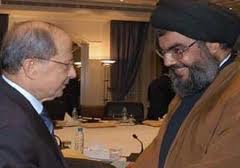 Commenting on , Aoun also said, “We are partners with Hezbollah, and we divide together. The share Sfeir is worried about will remain . No one will harm his religious position] , ” in reference to Maronite Patriarch Nasrallah Boutros Sfeir’s statement on Monday .

Sfeir said in an interview on Monday with MTV that “the way Hezbollah is acting gives the impression that they might seize power” in Lebanon.

Hezbollah has spearheaded several campaigns with the aim of discrediting STL. On Monday Iran’s supreme leader Ayatollah Ali Khamenei joined Hezbollah’s campaign against the Special Tribunal for Lebanon . He announced after a meeting with the emir of Qatar, Sheikh Hamad bin Khalifa Al-Thani that any indictment handed down by a U.N.-backed court looking into the 2005 killing of former Lebanese Prime Minister Rafik Hariri will be “null and void.”

Some leaders are concerned that should the court indict Hezbollah members, it could lead to a Sunni Shitte strife

March 8 politicians have called for the cabinet to task the Justice Council with investigating the so called false witnesses who reportedly gave unreliable testimonies to the international probe into the 2005 assassination of former PM Rafik Hariri. However, March 14 politicians believe that the regular judiciary should handle the matter.

Chairman of the Judicial and Administration Parliamentary Committee MP Robert Ghanem during an interview with “Arab week” and “Magazine” on Thursday explained the issue of false witnesses :

“ Article 408 and some other articles of the Lebanese Penal Code define the false witness as the person who testifies to the judicial authorities and provides contradictory testimony , but the testimony before the security forces or law enforcement authorities ( not in front of a judge ) is considered a false testimony”.