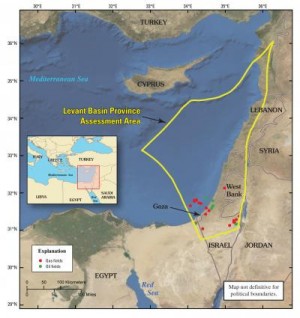 Cyprus and Israel signed an accord Friday demarcating their maritime borders to facilitate a search for mineral deposits in the east Mediterranean where huge natural gas reserves have been discovered.

Cyprus Foreign Minister Markos Kyprianou and Israel’s Infrastructure Minister Uzi Landau signed the deal in the island’s capital. No statements were made after the signing.

Cyprus has similar agreements with Egypt and Lebanon, but the Lebanese parliament has yet to ratify the deal.

Turkey strongly objects to any Greek Cypriot search for oil and gas inside the island’s 51,000 square-kilometer (17,000 sq. mile) exclusive economic zone off its southern coast, saying it also has rights and interests in the area.

Cyprus was split into a Greek Cypriot south and a Turkish Cypriot north in 1974 when Turkey invaded in response to a coup by supporters of union with Greece. The island joined the EU in 2004, but only the internationally recognized south enjoys membership benefits. Turkey only recognizes the breakaway north where it maintains 35,000 troops.

Cyprus has licensed U.S. firm Noble Energy to explore an 800,000-acre area bordering Israeli waters where massive gas fields have been found under the seabed.

Two fields, Tamar and Dalit, discovered last year, are due to start producing in 2012, and experts say their estimated combined reserves of 5.5 trillion cubic feet (160 billion cubic meters) of natural gas can cover Israel’s energy needs for the next two decades.

Noble Energy is also part of a consortium developing the fields and predicted in June that Israel will also have enough gas to export to Europe and Asia from a third field — Leviathan, thought to hold up to 16 trillion cubic feet (450 billion cubic meters) of gas.

Cyprus Energy Service Director Solon Kassinis told The Associated Press in an e-mail that there are currently no estimates on gas reserves inside the Cypriot zone because drilling has yet to begin.

Noble has not said when drilling would start inside its Cypriot block.

Kassinis said Cyprus’ agreement with Israel “doesn’t conflict” with its deal with Lebanon.

Lebanese lawmakers have said that some of Israel’s recently discovered gas fields stretch into Lebanese territorial waters. Israel has denied the charge.

Hezbollah has threatened to use force to protect Lebanon’s natural wealth.