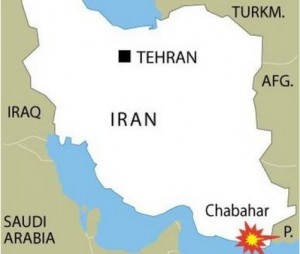 The Jundallah organization, a militant Sunni group that claims to represent Iran’s mostly Sunni ethnic Baluch minority, posted on a website that it was responsible for the attack. The bombing was the latest sign that the troubles in South Asia, including Sunni extremism, are increasingly seeping into Iran

Footage aired on Iranian television showed bloodstained asphalt in the city of Chabahar’s Farmandari Square as panicked crowds rushed toward the site of the blast and emergency response personnel loaded the injured into waiting ambulances.

Initial reports described at least one blast outside the Hossein Mosque and another one or two failed bombing attempts. Shortly after the attack, Jundullah posted photographs of two smiling young men, identified as Seif Rahman Chabahar and Hassan Khasi, wearing what appeared to be explosives-laden belts.

“Today two brave warrior offspring of Baluchistan carried out two operations against the governor and dozens of mercenaries of the Revolutionary Guard,” said the statement on the website.

The two suspected bombers were killed by the explosives. Another suspect was shot dead by police and a fourth was arrested after his explosives failed to detonate outside the office of the provincial governor, the semi-official Fars News Agency reported.

Jundallah and the Iranian government are locked in an ongoing war that has claimed the lives of hundreds of people over the past five years. The eventual death toll from Wednesday’s bombing could surpass an Oct. 18, 2009 attack, also claimed by Jundallah, which killed 42 people in the city of Pisheen. That was Iran’s deadliest internal terrorist attack in 20 years.

The Iranian government has accused the United States of supporting Jundallah, an assertion denied both by American officials and the militant group. Washington placed Jundallah on its list of terrorist organizations last month.

In the immediate aftermath of Wednesday’s bombing, Iranian officials repeated claims that the attack had been carried out by Jundallah with American and Arab support.

“The perpetrators of these attacks are the Wahabi and Salafist detractors of the revolution of Imam Hossein and those standing behind them, such as the United States and the United Kingdom,” Iranian lawmaker Kazem Jalali told Iranian Al Alam TV, referring to Saudi Arabia, which practices the strict interpretation of Islam known as Salafism.

Ali Abdollahi, Iranian deputy minister of interior for security affairs, echoed the allegations against the U.S., telling the official Islamic Republic News Agency that the “equipment” used in the attack had been provided by the American government and its allies.

But Jundallah has warned that it was planning retaliatory strikes against the U.S. in Afghanistan and Pakistan after Washington’s decision last month to blacklist the group.

“Jundallah will in time respond to the United States’ decision,” a statement last month read. “This decision will cause instability in Middle East and … cause more harmful problems for the United States and its allies. Jundallah does not need the support of United States, nor does it fear its condemnation of Jundallah’s actions.”

Chabahar is a mostly Sunni city near the Pakistani border, and Iran’s only major port on the Gulf of Oman, making it vital to Iranian trade with Central Asia.

Observers say sectarian tensions have risen since the city swelled from a few thousand inhabitants to 80,000 in a few decades, as Shiites from other parts of Iran moved to the predominantly Sunni city seeking work in the new government-funded rail and port infrastructure projects.