Mahmoud Mohammed Ajjaj, 30, was found dead on Tuesday with several gunshot wounds in a location near the sugar factory in Majdal Anjar, near the Syrian border. 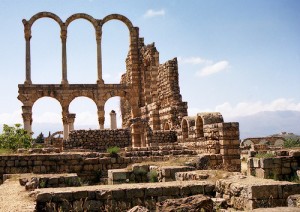 Investigations headed to scene to identify the circumstances as the army and the Internal Security Forces encircled the area. The body of Ajjaj was taken to the Elias Hrawi hospital in Zahle

The eastern Bekaa Valley has historically been known as a safe haven for fugitives.

Photo: Anjar is known for its 8th century ruins of the Umayyad dynasty. This was one of the region’s only examples of a covered shopping mall . The city ruins cover an area of 114,000 square meters ( 1, 227, 085 square Ft) and are surrounded by large, fortified stone walls, over two meters thick ( 6.6 Ft) and seven meters high (23 ft) .