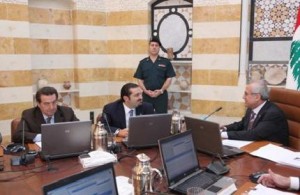 The ministers have been called to a cabinet session to be held on Wednesday at the Presidential Palace in Baabda, Future News reported on Friday.

The decision to hold the session was reached after consultations between president Michel Suleiman and prime minister Saad Hariri .

The cabinet has not met since its November 10 session, during which discussion of the “false witnesses” controversy was postponed to avoid a divisive vote. According to local reports March 14 has no objections against discussing the issue of false witnesses as long as there is no vote on the issue and as long as other issues are also discussed

During a press conference , Lebanon Labor Minister Boutros Harb, a key member of March 14 alliance proposed a solution to the false witnesses issue . He linked the issue to the Syrian arrest warrants that were issued in the case of former General Security chief Jamil as-Sayyed. Harb is also expected to formally propose his solution during the cabinet session

March 8 politicians have called on the cabinet to ask the Judicial Council to investigate the issue of witnesses who gave unreliable testimonies to the international probe into the late PM Rafik Hariri’s 2005 murder. However, March 14 figures have said that the regular judiciary should handle the matter.