Arrest of founder of WikiLeaks appears near 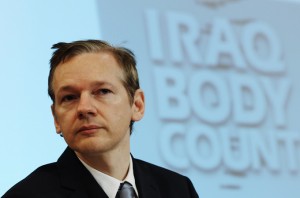 The legal noose tightened around Julian Assange, the founder of WikiLeaks, after his lawyers said Monday that an Interpol notice and European arrest warrant would oblige the British police to arrest him for questioning on accusations of rape from Sweden.

The BBC, and a message on the WikiLeaks Twitter feed, reported that new warrants had been issued and that his arrest might be imminent.

Mark Stephens, a lawyer for Mr. Assange, told NBC News that a place and time were being negotiatedfor Mr. Assange to meet with Scotland Yard.

Meanwhile, a Swiss bank account held by Mr. Assange for donations to WikiLeaks and his legal defense has been frozen.

Marc Andrey, a spokesman for PostFinance, the finance arm of the Swiss Postal service SwissPost, said in a telephone interview from Bern that the account was closed because Mr. Assange “gave us false information when he opened the account,” saying that he lived in Switzerland.

Mr. Andrey said SwissPost offers accounts only to those who are Swiss or reside in Switzerland. Mr. Assange holds Australian citizenship and is currently believed to be in hiding in England. “As soon as we verified that he doesn’t live here,” said Mr. Andrey, “we blocked the account.”

Shortly after PostFinance issued a press release announcing the termination, WikiLeaks responded with a notification of its own, sent via its Twitter feed. The message, which described Mr. Assange as a “homeless refugee” claimed that the account held 31,000 euros, or about $41,000.

The move by the Swiss bank had thrown into relief, it said “the power dynamics between supposedly independent states like Switzerland, Sweden and Australia,” an apparent reference to efforts by businesses and his home government to distance themselves from WikiLeaks’ activities following the release of classified American diplomatic cables from over 250,000 it had obtained.

On Sunday the American ambassador to Switzerland, Donald S. Beyer Jr., told the Swiss weekly magazine NZZ am Sonntag that the country “should very carefully consider whether to provide shelter to someone who is on the run from the law.”

Mr. Andrey said that SwissPost had not, to his knowledge, come under pressure from Swiss or American officials to close the bank account. Efforts to contact Mr. Assange to arrange for the funds in the account to be transferred had been unsuccessful, he said.

WikiLeaks’ site still showed Swiss bank details and asked for donations to the Julian Assange Defense Fund on Monday afternoon. Mr. Assange is facing extradition to Sweden, prompted by Swedish prosecutors seeking information on allegations of rape, sexual molestation and unlawful coercion made by two women in Stockholm this summer.