Interview: In Brazil, from prisoner to president 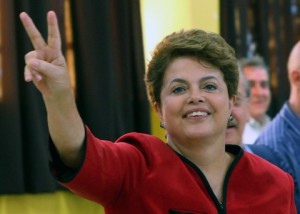 Four weeks ago, Brazilians elected their first female president – Dilma Rousseff, the chosen candidate of Luiz Incio Lula da Silva, Brazil’s popular outgoing president. Rousseff comes to power with an unusual background: She fought in the 1960s underground against the military regime that then ruled Brazil, and she was imprisoned and tortured between 1970 and 1972. She then started in local politics and joined Lula’s government in 2002 as minister of mines and energy, eventually becoming his chief of staff. On Dec. 2, in her first lengthy interview since the vote, Rousseff spoke about her plans for the next four years. Excerpts:

There is no question about that. Due to the fact that I experienced personally the situation of a political prisoner, I have an historical commitment to all those that were or are prisoners just because they expressed their views, their public opinion, their own opinions.

So, will that affect your policy toward Iran, for example? Why is Brazil supporting a country that allows people to be stoned, that jails journalists?

I believe that it is necessary for us to make a differentiation in [what we mean when we refer to Iran]. I consider [important] the strategy of building peace in the Middle East. What we see in the Middle East is the bankruptcy of a policy – of a war policy. We are talking about Afghanistan and the disaster that was the invasion of Iraq. We did not manage to build peace, nor did we manage to solve Iraq’s problems. Iraq today is in civil war. Every day soldiers on both sides die. To try to build peace and not to go to war is the best way.

[But] I do not endorse stoning. I do not agree with practices that have medieval characteristics [when it comes] to women. There is no nuance; I will not make any concessions on that matter.

I am not the president of Brazil [today], but I would feel uncomfortable as a woman president-elect not to say anything against the stoning. My position will not change when I take office. I do not agree with the way Brazil voted. It’s not my position.

Many Americans had sympathy for the Iranian people who rose up in the streets. That’s why I wondered if your position on Iran would be any different than that of your current president, who has good relations with the Iranian regime.

How do you view Brazil’s relationship with the United States? How would you like to see it evolve?

I consider the relationship with the U.S. very important to Brazil. I will try to forge closer ties with the U.S. I had great admiration for the election of President Obama. I believe that the U.S. at that moment showed tremendous capacity to show that it is a great nation, and it surprised the world. It may be very difficult to be able to elect a black president in the U.S. – as it was very difficult to elect a woman president in Brazil.

I believe that the U.S. has a great contribution to give to the world. And above all, I believe that Brazil and the U.S. have to play a role together in the world. For example, we have great potential to work together in Africa, because in Africa we can build a partnership to make available agricultural technologies, biofuel production, humanitarian aid in all fields.

I also believe, in this moment of great instability due to the global crisis, it is fundamental that we should find ways that will guarantee the recovery of the developed countries’ economies because that is fundamental to the stability of the world. None of us in Brazil will be comfortable if the U.S. carries high rates of unemployment. The recovery of the U.S. is important for Brazil because the U.S. has an extraordinary consumer market. Today, the highest trade surplus of the U.S. is with Brazil.

Do you blame that on quantitative easing?

The quantitative easing is a fact that concerns us a lot because it means a dollar-devaluation policy that has effects on our foreign trade and also in the devaluation of our hard currency reserves that are in dollars. For us, a weak dollar policy is not compatible with the role the U.S. plays due to the fact that the U.S currency serves as an international reserve. And a systematic devaluation policy of the dollar can trigger reactions of protectionism, which is never a good policy to follow.

When do you plan to visit the United States? I know you were invited to go before your inauguration on Jan. 1, but you couldn’t go.

I am not accepting any invitations I receive. I am not visiting any foreign countries. I have to set up my own administration. I have 37 cabinet ministers to name. I am planning to visit President Obama in the very first days after my inauguration if he’ll receive me.

And then you will invite President Obama to come to Brazil?

We have already invited him informally, during the G-20 meeting.

There are concerns in the U.S. business community as to whether Brazil will continue on the economic path set out by President Lula.

There’s no question about that. Why? Because for us this was the major achievement of our country. It is not an achievement of one sole administration – it is an achievement of the Brazilian state, of the people of our country. The fact that we managed to control inflation, have a flexible exchange-rate regime and fiscal consolidation so that today we are amongst the countries in the world that has the lowest debt-to-GDP ratio. Also, we have a not very significant deficit. I don’t want to brag, but we have a 2.2 percent deficit. We intend in the next four years to reduce the debt-to-GDP ratio and to guarantee this inflationary stability.

You have said publicly that you would like to see interest rates come down. Will you cut the budget or reduce the yearly increase in government spending?

There is no way that you can cut interest rates unless you reduce your fiscal deficit. We are very cautious. We have an objective in mind: that our interest rates be convergent with international interest rates. To manage to get there, one of the most important issues is to reduce the public debt. The other important issue is to improve the competitiveness of our manufacturing and agricultural sectors. It is also very important that Brazil rationalize its tax system.

If you want to bring interest rates down, you must either cut spending or increase domestic savings.

You can’t forget about economic growth. You have to combine many things.

What is your plan?

My plan is to continue the trajectory we have followed until today. We managed to reduce our debt from 60 percent down to 42 percent. Our objective is to reach 30 percent of our GDP. I need to rationalize my spending and at the same time have an increase of our gross domestic product that will lead the country forward.

So what do you mean when you say “rationalize spending”?

We are not in a depression here. We do not have to cut government spending. We will cut expenses but continue to grow.

We are following a very special path. This is a moment where the country is growing. We have macroeconomic stability, and at the same time we have great pride in the fact that we managed to reduce extreme poverty in Brazil.

We brought 36 million people into the middle class. We lifted 28 million from extreme poverty. How did we manage to do that? Income-transfer policies. The Bolsa Familia is one of its major examples.

We pay a stipend, which is an income stipend to the poor. They get a card and they withdraw their income, but they have two duties they have to abide by: They have to put their kids in school, and they have to prove they attend 80 percent of the classes. At the same time, children should also get all the vaccines, and they have to go through a medical evaluation when they get their vaccines. This was one factor that was responsible, but it wasn’t the only one.

You are so close to President Lula. Are you really going to be different, or will you just be a continuation of his administration?

I believe that my administration will be different from President Lula’s. President Lula’s administration, which I was part of, built a base from which I will advance. I will not repeat his administration because the situation in the country today is much better than it was in 2002. I have underway government programs that I helped develop, like the one called My House, My Life, which is a housing program.

Brazil has gone for more than 30 years without investing in infrastructure in a sufficient amount. President Lula’s administration started to change that. I have to solve the road issues in Brazil, the railroads, the highways, the ports and the airports.

But there’s good news: We discovered oil in deep waters.

Are you suggesting that the findings will finance the infrastructure?

We have created a Social Fund [whereby] some government resources from the oil find will be invested in education, health care, science and technology.

You have to prepare the country for the World Cup and the Olympics.

Yes, but I also have another commitment, and that is to end absolute poverty in Brazil. We still have 14 million in poverty. That’s my major challenge.

All the businessmen I met with in Sao Paulo said they had to be very prepared to meet with you because you are very familiar with most projects.

Yes, it is true. I think it is a female characteristic. We enjoy the details. They don’t.

What does it mean to you to be the first female president of Brazil?

Even I think it is amazing.

When did you decide you wanted to be president?

That was a process. There is no date. I started working with President Lula, and he started to give some hints about me coming to the presidency, but he wasn’t clear on that in the beginning. It was a great honor for me, but I was not expecting it.

From the moment that it was made clear to me that I would be nominated two years ago, I knew that we had created the proper conditions to make it possible to win the elections. President Lula had an excellent administration, and the Brazilian people recognized that and acknowledged that. We are a different administration – we listen to the people.

Yes, but I believe I managed to cope well with it. People have to know that cancer can be cured. The earlier you discover it, the better are your possibilities for a cure. That’s why prevention is important. . . .

I believe that Brazil was prepared to elect a woman. Why? Because Brazilian women achieved that. I didn’t come here by myself, by my own merits. We are a majority here in this country.