The leaders of six U.S.-allied Gulf Arab nations come together Monday for talks expected to span from Qatar’s surprise selection to host the 2022 World Cup to the region’s deep concerns about Iran’s nuclear program.

The two-day meeting in Abu Dhabi will be the first gathering of Gulf leaders since U.S. diplomatic memos released by WikiLeaks revealed the urgency of their fears about Iran’s nuclear ambitions — including appeals by some Gulf rulers for the U.S. to launch a military strike. 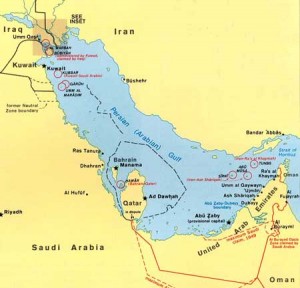 The leaked memos give a sense of drama that is normally absent from the annual summit of the Gulf Cooperation Council, or GCC, a six-nation bloc that typically focuses on economic issues and prefers behind-the-scenes dealings to address disputes in their own backyard.

But the group, dominated by powerful Saudi Arabia, may now feel pressure to publicly clarify its views on Iran. The leaked memos drove home that Saudis and other Gulf states with close ties to Washington view Tehran’s nuclear program and its support of militants in the Middle East with serious alarm.

“The Gulf leaders know they are on the front lines against Iran. They make their fears known in private,” said Sami Alfaraj, head of the Kuwait Center for Strategic Studies. “The summit in Abu Dhabi could give some clue if they are now willing to take a harder line in public.”

The meeting also comes after a diplomatic blitz through the Gulf with Iran as the central theme.

In Bahrain, U.S. Secretary Hillary Rodham Clinton told a security conference Friday that Iran must prove to the world that its nuclear program is peaceful. A new round of nuclear talks between Iran and world powers, including the U.S., are scheduled to open Monday in Geneva.

The day after Clinton’s speech, Iranian Foreign Minister Manouchehr Mottaki assured the same Bahrain conference s a pivotal moment for the region, which is investing heavily in sports, hotels and international commerce to move beyond its role as simply an oil spigot for the world.

“That Qatar now stands to host the most popular sporting event on Earth is an indication of how far that country, and indeed the region, has come in the last decade,” said an editorial in Abu Dhabi’s state-backed newspaper The National. “Such a scenario would have been unthinkable just a few years ago.”

Efforts at greater economic integration for the Gulf states, however, have faced hurdles.

Proposals for a common Gulf currency are now stalled. But this week’s meeting could bring some headway in other fronts, including possible approval for unified rules on foreign investment and the green light for a $20 billion rail network linking the six nations.

Still, the toughest decisions could be how — or even whether — to respond the contents of the U.S. diplomatic cables on WikiLeaks.

The blunt language in the memos — including a call from Bahrain’s king for the U.S. to “terminate” Iran’s nuclear program “by whatever means necessary” — is in stark contrast to the carefully chosen words Gulf monarchs and their top officials use in public.

“The essence of much of the contents of the memos was already known,” said Amr al-Shobaki, an Egyptian analyst. “But they add spice and details to what everyone already knew on relations between Gulf Arab nations and Iran.”