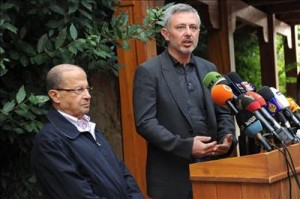 During a joint press conference with Marada Movement chief Suleiman Franjieh, Free Patriotic Movement leader Michel Aoun on Sunday warned he will not take part in Cabinet or dialogue sessions unless the false witnesses’ issue has been settled.

Aoun’s remarks came at the end of a visit to Franjiyeh’s mansion in Bnashi in northern Lebanon.

Commenting on the tension in Lebanon Franjieh said that “no one wants to take to the streets.”

Franjieh said that there is a race between the US, Saudi Arabia and Syria to deal with latest Lebanese tension.

“Security problems or conflict between Christian parties are very unlikely unless provoked by the presence of a particular individual,” Franjieh said, referring to Lebanese Forces (LF) leader Samir Geagea.

“If this person [Geagea] was not dealing with politics, would anyone be talking about tension?” Franjieh asked, adding that the LF “are the ones who claim they can take over certain regions in a short period of time.”

Both leaders vowed not to abandon each other. “There is political and national understanding between us (Franjieh and Aoun) which no one can separate,” Aoun told reporters.

Franjieh too stressed on the “political alliance” with Aoun.

Commenting on the issue of the Special Tribunal for Lebanon , Franjieh said that anyone with STL “does not want the best for Lebanon.”

Commenting on Hezbollah arms Aoun said : “The resistance is a legitimate right that allows people to carry arms to confront an enemy ”.

In a related development Aoun told a delegation of students from the Notre Dame University on Saturday: “ FPM does not carry arms. You hear that Lebanese Forces members have arms. No one has weapons and no one can do anything even if they were armed .” He was commenting on the the reports that FPM members are being armed and trained by Hezbollah.

He said that possible clashes are not likely to break out in Christian areas, adding that “there are enough security forces to maintain stability .”

“Lebanon is going through turmoil. We are on the doorstep of political and social events.”

Commenting on the arrest of retired Brig. Gen. Fayez Karam, Aoun said Karam, has been detained as part of a campaign against the Free Patriotic Movement. He stressed that Karam was not guilty.

Karam who was still a key a FPM official at the time he was arrested , was charged with espionage and providing Israel with information on Hezbollah, Aoun’s closest ally.

MTV quoted a Free Patriotic Movement source last September 23 as saying that the reason behind MP Michel Aoun’s campaign against the police Intelligence Bureau and Attorney General Said Mirza is a confession made by Karam, before Investigating Judge Riad Abu Ghaida, in which he confirmed Aoun’s knowledge of his spying activity for Israel since 2006 at least.

“Karam confessed that he had visited Aoun’s resident in Rabiyeh during the July 2006 war, telling him: General, you know about my relation with an officer in Israel’s intelligence services, who nowadays became a diplomat in London, so what do you say if I suggest to him that you become the mediator between them (Israel) and Hezbollah in order to end the war and then you’d play the heroic role before everybody?” the MTV source added.

The source added that Karam’s lawyer had warned Aoun that such a confession represented a proof about his prior knowledge of Karam’s collaboration with the Israelis. “Aoun decided to face this worrying fact through waging a fierce campaign against the Intelligence Bureau and the Judiciary and pushing Hezbollah to join the campaign, the thing he managed to attain through (former General Security chief Maj. Gen.) Jamil Sayyed, whether Hezbollah knew it or not,” the source added.

On September 5 Aoun attacked the government and the president in a televised speech and called for resignations of several ministers.

On the eve of Independence Day, Lebanese Forces leader Dr Samir Geagea on Sunday issued a statement in which he said that the region is passing through “delicate circumstances that could determine the fate of its countries and peoples and Lebanon is not isolated from what is happening.”

Geagea believes that the ” culture of death was life-threatening.”

“We seek freedom and strive for it,” the statement aded