Tensions have risen dangerously in Lebanon, as Syria, Iran and Hezbollah try to pressure Prime Minister Saad Hariri to repudiate an international investigation into the 2005 assassination of Mr. Hariri’s father, Rafik Hariri, a former prime minister. The inquiry is likely to issue indictments implicating Hezbollah, and perhaps its Syrian sponsors, in the crime.

Syria and Hezbollah’s top leader, Hassan Nasrallah, have bluntly warned the Lebanese government to halt cooperation with the investigation or risk violent reprisals. Syria also has issued arrest warrants for senior Lebanese police officials and prosecutors for allegedly giving false testimony in the inquiry and has opened the border to an even larger than usual flow of Syrian and Iranian arms to Hezbollah.

The Obama administration has offered strong rhetorical support to the Lebanese government. It now has the chance to provide more substantive backing, after Representatives Howard Berman of California and Nita Lowey of New York lifted the holds they placed in August on $100 million in military aid to Lebanon.

Congress was right to raise concerns at a time of rising tensions between Lebanese and Israeli troops that culminated in a deadly cross-border shooting. United Nations investigators later found Lebanese soldiers to blame for the clash. The Obama administration then sought and received assurances from Lebanese military leaders that such incidents will not be repeated.

The restoration of aid should give Lebanese authorities an immediate, symbolic boost. The administration should build on it with additional statements of support for Prime Minister Hariri and Lebanon’s institutions in the difficult weeks ahead. 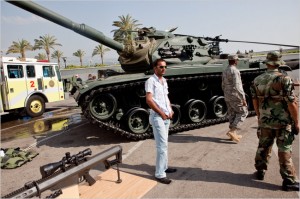 The military aid is vital for Lebanon’s long-term stability. Under President George W. Bush and now President Obama, Washington has spent $670 million trying to build up the Lebanese Army as a nonsectarian national institution. This money is supposed to help the army take full control of the southern regions bordering Israel, formerly dominated by Hezbollah.

The White House is going to have to press Lebanon’s case with the new Republican leadership in the House. Representative Ileana Ros-Lehtinen of Florida, the likely new chairwoman of the Foreign Affairs Committee, has been critical of the aid program, suggesting that Hezbollah could be the ultimate beneficiary.

A stable Lebanon, with a government that can stand up to outside intimidation and a national army in control of all its territory, is clearly not what Hezbollah wants. It is in the clear interest of the United States. NYT