Makhoul, 52, admitted to the charges in a plea bargain that will see him jailed for seven to 10 years.

Under the deal, prosecutors dropped the most serious charge – assisting an enemy in a time of war – for which he could have faced life in prison. He will be sentenced in November.

Makhoul was arrested in May, along with Israeli Arab activist Omar Sayid.

Charges against Mr Sayid were reduced in a plea bargain and he was freed last month after serving a seven-month jail term.

The Israeli press was initially barred from reporting on the case, but when the gag order was lifted, Israeli Arab pressure group Adalah said their arrest and interrogation had been conducted “in gross violation of their fundamental rights to due process”.

Makhoul’s lawyer, Hussein Abu Hussein, said he agreed to a plea bargain because of the difficulty of proving his innocence. 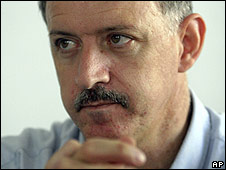 He said the information that Makhoul shared was common knowledge and available on the internet.

In May, Makhoul and Sayid confessed that they passed information about Israeli bases to the Lebanese militant and political group, Hezbollah.

Prosecutors said they sent information to their Lebanese contacts over the internet using sophisticated encryption programs.

In 2006, Israel and Hezbollah fought a devastating war that killed more than 1,200 people in Lebanon, most of them civilians, and more than 160 Israelis, mostly soldiers.

Makhoul is the director of Ittijah, the Union of Arab Community-Based Associations, the brother of a former Israeli-Arab member of Israel’s Knesset, or parliament, and an outspoken critic of Israel’s treatment of Palestinians and Israeli Arabs.

Last September Lebanon filed a complaint to the United Nations over Israeli spy networks in the country. A list comprising the names of more than 100 people who have been convicted or accused of spying for Israel was enclosed with the complaint.

The complaint, which was prepared by the foreign ministry and presented by Lebanon’s U.N. ambassador, Nawaf Salam, said the spy networks “constitute an aggression on Lebanon and on its sovereignty and a clear violation of international resolutions, particularly resolution 1701.”