STL media forum to explain how the court works 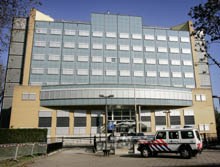 The Media Forum on the Special Tribunal for Lebanon (STL) kicked off its work this week in Leidschendam, a suburb of The Hague, with a briefing about the UN-backed court’s procedures as well as the roles of the main actors in the proceedings.

The three-day Media Forum is the brainchild of the STL’s Outreach Section, and aims to assist media editors and journalists in their work by providing them with information about the STL and the wider context of international criminal justice.

The vice president of the United Nations International Criminal Tribunal for former Yugoslavia (ICTY), Judge O-Gon Kwon, gave participating journalists an overview on the development of international criminal law in the 20th century, from the Nuremberg court to try prominent leaders of Nazi Germany, in the aftermath of World War II, to the STL probing the 2005 assassination of Lebanese former Prime Minister Rafik Hariri.

The head of the court’s Outreach Section, Olga Kavran, told The Daily Star that the idea for this year’s Media Forum came out of discussions with members of the Foreign Press Association in The Netherlands, the event’s co-organizers.

“These discussions focused on identifying the issues that are most complex for journalists when they try to follow the work of international judicial institutions and the best ways in which an institution can reach out to journalists and assist them in their work,” said Kavran.

The purpose of the Media Forum, according to organizers, was also to receive feedback from the participants as to how the STL can better assist them.

The head of Outreach said one of the main functions of her department, which operates as part of the STL’s Registry, was to work with members of the media and assist them in understanding the mandate and role of the court.

“For the STL to be effective in its mission and fulfill its mandate, it is imperative that its role and activities are understood by the Lebanese,” she said.

Prime Minister Saad Hariri, the son of the slain politician, and his allies in the March 14 coalition have been caught in a standoff with Hizbullah over the indictment to be issued by the STL.

In July, Hizbullah leader Sayyed Hassan Nasrallah announced that the tribunal would indict “rogue” members of his party. The secretary general’s announcement confirmed several reports in the foreign press in the past year that suggested that the tribunal was moving to issue a verdict against Hizbullah.

According to Kavran, through the Outreach section, the STL must “establish and sustain an open channel of communication with all segments of Lebanese society,” in order to “identify misconceptions and misinterpretations of the tribunal’s work and clarify and correct it where necessary.”

On Thursday, participants visited the headquarters of the ICC and the ICTY, where they attended a trial in session.

On Friday, participants are expected to take part in a roundtable discussion on the challenges facing media in reporting on international courts, where Lebanese journalists will share their experiences with their colleagues from former Yugoslavia.

“In order to place things in their proper context, it is very useful for journalists to see the wider context of international criminal justice. This is why we organized visits to the ICTY and the ICC.” Kavran said. “It is very useful for journalists to speak to their colleagues who have had the experience of reporting on international justice, to exchange ideas and discuss challenges they all face.” DS