by yalibnan
2332
The Assad-Hariri honeymoon is over and the Syrian regime thinks "it's time to replace Hariri, " according to a report by Al Akhbar
Share: 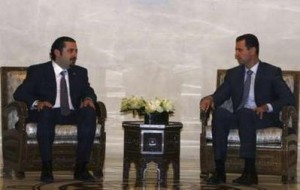 According to a report published Wednesday by the pro-Syrian newspaper Al Akhbar , Syria is disappointed with Lebanese Prime Minister Saad Hariri’s performance, particularly after a series of meetings with Syrian President Bashar Assad over the past year.

An unidentified Damascus official has reportedly told al-Akhbar that “we must make a deep change in Lebanon. Saad Hariri is the only obstacle to reconciliation between the Syrian and Lebanese people.”

“Two years ago, Damascus thought that if it would open a new page with Hariri – trust would be built between the two people, so it decided to reconcile with him without any reservations,” the Syrian official said.

“Damascus took the path of reconciliation with Hariri, without settling any scores and with nothing in return, although he was the one who took part in the international scheme to bring down the Syrian regime. He knows Damascus has unconditionally forgiven him , ” the Syrian official added.

According to the official Hariri was always tense in Syria, never felt that Syria is his second home and never opened up to the Syrian leadership. The official concluded that the Assad Hariri honeymoon is over and the Syrian regime thinks “it’s time to replace Hariri.” He added that a series of meetings and consultations have been held in Damascus recently to discuss alternatives.

According to Ali Hussein , a Lebanese political observer ” Assad seems to forget that Lebanon is not Syria . While in Syria Assad can change a prime minister a day in Lebanon we have a parliament that decides who should be the prime minister . Since Hariri represents the parliament majority , the premier position is his as long as he wants it , regardless of the alternatives Assad may have in mind”