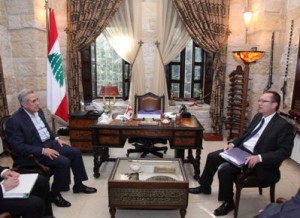 During his meeting with US Assistant Secretary of State for Near Eastern Affairs Jeffrey Feltman on Sunday, President Michel Suleiman  expressed his gratitude for US President Barack Obama ’s support for Lebanon and reiterated the importance of national unity, according to a statement from the presidential office.

Feltman arrived in Beirut from Riyadh on Sunday and was received at Rafik Hariri International Airport by US Ambassador to Lebanon Maura Connelly, who also attended the meeting with Suleiman.

During a press conference prior to departing from Beirut airport Feltman was asked about the purpose of his short stop in Lebanon , he said:

“I came to deliver a presidential message from US President Barack Obama reaffirming US commitment to a stable, secure, independent and sovereign Lebanon.”

“A strong, sovereign and stable Lebanon is in the vital interests of the Lebanese people, the region, the US and the international community,” Feltman said, adding that “we are concerned by any act undermining sovereignty and stability.”

Feltman also said that there was no connection between his special visit to Lebanon and the talks he just held in Riyadh, saying that his Saudi trip was a routine bilateral visit in which he discussed a number of issues, including “shared support for Lebanon.”