by yalibnan
476
By: James Zogby Other than stirring the pot of discontent and rubbing old wounds raw, Ahmadinejad offers no solutions.
Share: 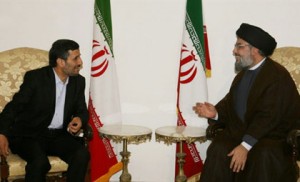 In “Arab Voices” I describe Lebanon as “a tinderbox, with too many groups still playing with matches”. Iranian President Ahmadinejad’s visit to that dear but fragile country has to be seen in that context.

Instead of helping Lebanon and its fractured polity come together, he worked to deepen their deep divisions. Instead of recognizing the country’s vulnerability and the dangers of renewed conflict with Israel, he egged them on. And instead of acknowledging Lebanon’s unique character, he behaved as if the country were an extension of his own.

His bluster and triumphalism and his verbal flights of fancy may have created momentary euphoria in his alienated and disenfranchised audiences, but celebrations and speechifying do not reflect reality nor do they provide a pathway to needed change. As such, his visit and his behavior amounted to nothing more than a dangerous provocation.

I maintain what I said back in 2006 when too many Arabs across the political spectrum were celebrating Hezbollah’s “victory” – can we be so desperate that losing 1,400 lives and incurring billions of dollars of damage and the destruction of so much of the country’s infrastructure can still be called a victory? What happened in 2006 was a tragedy and a disaster, pure and simple. It was a wasted and foolish war which no one won – and one in which Lebanon and its people paid too great a price.

The behavior of the Iranian President reminds me of what Dr. Ron Walters used to say about Rev. Louis Farrakhan, the leader of the Nation of Islam. Ron, who passed away last month, was an African American political scientist and one of the smartest analysts with whom I’ve had the honor to work. In 1984, as Jesse Jackson was running for President, seeking to empower African Americans under the banner “our time has come”, Farrakhan jumped into the mix. He used the occasion to regularly issue forth outrageous comments creating a continuous stream of disruptions and provocations. Knowing that the spotlight would always be on him (the loudest and most extreme voice always draws the most attention) and that he could always goad opponents into attacking him, Farrakhan never wasted an opportunity to take center stage and create a distraction.

One day Ron sat with a group of us to analyze what was taking place. He understood the game that was afoot. Farrakhan needed to be the story and knew that creating outrage was the way to do it. Did his antics advance the African American agenda? No. Did it further empower the community? No, in fact, more often than not, it created setbacks. But it did succeed in advancing Farrakhan’s agenda and, as he would engage in provocations that would create angry rebukes, it kept him at the center of attention.

I asked Ron to explain the community’s reactions to all this. He replied that “Farrakhan is the measure of the depth of black alienation from white America”. Farrakhan understood this and so knew that his clever rhetoric would inflame passions (even among some in the so called “black establishment”, who despite their success shared in the alienation born of discrimination). And he knew that whites would respond and counter attack and that this would only serve to deepen the support he would then receive from among his already alienated supporters. It was a vicious and unending game, in which the fears of some whites were reinforced, the frustrations of some African Americans were likewise reinforced, and nothing changed for the better – except that Farrakhan drew record crowds and got lots of press.

This same dynamic is playing out in Lebanon and across parts of the Arab World today. Lebanon, in desperate need of reform and national reconciliation, is struggling to restore its sovereignty and its unity. Palestinians are denied freedom, with Gaza under siege, and the West Bank, despite some progress, still occupied. Millions of Palestinians remain in refugee camps, denied their fundamental rights. Iraq is in disarray and in many parts of the Arab World, having witnessed repeated tragedies in Palestine, Lebanon and, now Iraq, there is a gnawing sense of powerlessness and disarray and an uncertainty about the future.

Into this world, comes Ahmadinejad with his “in your face” bravado and his blusterous taunts. His message fuels anger, which provides but a temporary salve. Other than stirring the pot of discontent and rubbing old wounds raw, he offers no solutions for change. Instead of counterattacking and playing into his game (which benefits only him and his enemies), the response should be to proceed apace with the change the region so desperately needs. Strengthening Lebanon with reforms to empower the disenfranchised and working to guaranteed freedom and long denied rights to the Palestinians, would be the perfect places to start. As long as these wounds fester, the region will be a fertile place for alienation, provocation and disruption.