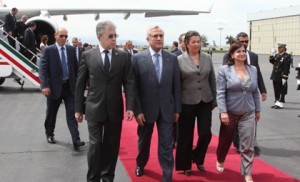 Lebanese President Michel Suleiman arrived in Mexico City on Sunday evening for an official state visit at the invitation of Mexican President Felipe Calderón, according to a statement issued by the presidential press office.

Suleiman traveled to New York on Thursday for the 65th session of the UN General Assembly.

He will meet with various Mexican officials as well as representatives of the Lebanese-Mexican community , the statement added.

“We cannot isolate Lebanon from the International Community and this is why we asked to be part of the Security Council,” he stressed