A protester against Quran burning plan killed in Afghanistan

A protester against a US pastor’s plans to burn copies of the Qur’an is reported to have been shot dead in northern Afghanistan after crowds attacked a Nato base.

The man was killed in Faizabad, the capital of Badakhshan, a provincial government spokesman said. It happened when thousands of worshippers poured onto the streets after Eid prayers had been held in nearby mosques.

The crowd was estimated at around 10,000 people. Some had hurled stones at a Nato base run by Germans, and the protester was shot when troops inside opened fire, Amin Sohail said.

The Nato-led International Security Assistance Force in Kabul said it was aware of the protests and was investigating.

Demonstrations against the desecration of Islam’s holy book prompted threats of attacks on US bases elsewhere in Afghanistan. Protests were held in Kabul and near the Pakistan border.

“If they do this, we will attack American bases and close the highway used by convoys supplying American troops,” a cleric called Zahidullah told the Reuters news agency.

In London thousands of people gathered at the Ahmadiyya Muslim mosque, in Morden, to hear Hadhrat Mirza Masroor Ahmad, the world head of the community, denounce the US pastor.

“Religious extremism, be it Christian extremism, Muslim extremism, or any other kind is never a true reflection of the religion,” he said.

“A number of churches have condemned this act. There is nothing wrong with intellectual or theological debate, but this should be conducted within the bounds of decency and tolerance. Instead, what we are seeing is hatred being spread.” 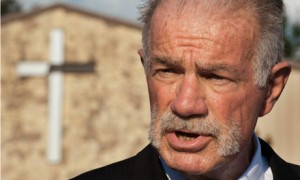 Terry Jones, the Florida pastor who threatened to burn copies of the Qur’an on the anniversary of 9/11, has “suspended” the event amid conflicting claims over a deal involving a planned Islamic centre near the site of the 2001 attacks on New York.

The extremist preacher first said he had cancelled the book-burning after condemnation by Barack Obama, the Pentagon, the state department in the US and outrage around the world.

Jones then said the event was only on hold, claiming he had been “lied to” over a deal to call it off in exchange for a promise to move the Islamic centre away from Ground Zero.

Speaking outside his Dove World Outreach Centre church in Gainesville, Jones said: “As of right now, we are not cancelling the event, but we are suspending it.”

The confusion over whether the burning would take place has done little to quell the global outrage.

The Afghan president, Hamid Karzai, said he hoped Jones would not proceed. “The Qur’an is in the hearts and minds of all … Muslims, but the affront against the holy book is a humiliation to the people,” Karzai told reporters at his palace after prayers.

“We are hopeful that he gives up this affront and should not even think about it.”

The president of Indonesia, which has the world’s largest Muslim population, called on the US to ensure that no burnings took place.

“I continue to urge the government and the people of the United States to ensure the prevention of such an incomprehensible, irrational and immoral act,” Susilo Bambang Yudhoyono said. Guardian