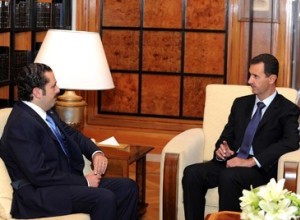 Lebanon Prime Minister Saad Hariri headed to Damascus Sunday evening at the invitation of President Bashar Assad who will host a Ramadan Suhoor ( pre-dawn meal) banquet for the Lebanese leader.

Hariri and Assad met Sunday evening and discussed ” the remarkable Syrian-Lebanese relations which affirm the depth of the historic relations between the two friendly peoples, in addition to discussing future prospects of bolstering cooperation between the two countries in all fields ” the government owned Syrian news agency SANA reported

Assad and Hariri had reportedly “affirmed their keenness on following up on what was achieved regarding bilateral relations, voicing their mutual desire to continue consultation and coordination to serve the interests of the two countries’ peoples and the interests of all Arabs, ” SANA added

SANA said Hariri “stressed that the historic visit of President al-Assad and the Custodian of the Two Holy Mosques to Lebanon affirms the keenness of Syria and Saudi Arabia towards Lebanon and supporting its national unity.”

SANA said the “talks dealt with the situation in Lebanon, with Assad affirming the need for continuing the approach of calming and dialogue to resolve problems, with the two sides underlining the importance of enhancing national accord and supporting the Resistance to guarantee Lebanon’s strength and immunity against the external dangers threatening its security and stability.”

SANA also reported that the 2 leaders discussed the situation in the region and the international arenas.

Following the talks Assad invited Hariri to have the Suhoor meal with him.

Hariri’s visit to Damascus comes after the clash that took place last Tuesday night in the Beirut neighborhood of Borj Abi Haidar between supporters of the pro-Syrian Association of Islamic Charitable Projects—also known as Al-Ahbash—and the Iranian backed Hezbollah militants , leading to the death of three people, including Hezbollah official Mohammad Fawwaz, his body guard and an Al-Ahbash member who is the son of a Beirut Mukhtar.

The clash was described by some analysts as a proxy war between Iran and Syria over the control of Lebanon. Hezbollah according to analysts is trying to out-maneuver Syria in Lebanon…. Hezbollah has reportedly become the principle bulwark resisting a Syrian comeback, because the party wants to preserve Lebanon for Iran.

No one is above the law

Prior to departing to Damascus Hariri said during an Iftar at the Grand Serial on Sunday“Lebanon will not become an arena of confrontation among its children” despite fears that Israeli aggression or internal strife may be approaching.”

The government is committed to ensuring that Tuesday’s clashes do not repeat in any form, Hariri said, adding that people must stop “using language of disparagement, slander, and provocation.”

“No one is above the law and the state must make domestic security its priority,” he added.