by yalibnan
877
The backlash rages on over "Metlak Mesh Ayzin" song by a Lebanese singer that beckons women back to domesticity
Share: 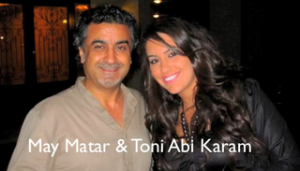 The backlash rages on over a recent Arabic pop song by a Lebanese singer that beckons women back to domesticity and is regarded by women’s rights activists as sexist and advocating backwardness.

In the latest development, a Lebanese composer and a singer have picked up the gauntlet and released a track that parodies popular Arabic songs considered by some to be patriarchal and demeaning to women.

The song is called “Metlak Mesh Ayzin“, or “We’re not in need of people like you” and is composed by Toni Abi Karam and performed by May Matar.

“We don’t want young men from the era of ignorance. He comes and controls us and says this is manhood,” Matar sings in Arabic.

It continues with, “We have young men who take pride in their education….. they are the young men who like girls for their intelligence and compassion. We’re not in need of men like you who are only concerned about themselves and their lust.”

The track, currently playing on Lebanese radio stations, is a response to songs such as “Jumhoriyet Albi,” or “The Republic of my Heart”- the hit single by Lebanese singer Mohammed Iskander released earlier this year which called on women to stay at home and take care of their husbands instead of working.

“We have no girls here that work with their degrees,” sings Iskandar in Arabic. “Our girls are pampered. Everything she wants is at her service. Assuming I agree that you work, what would we do about your beauty? Your job is taking care of my heart … it’s enough that you’re the republic of my heart,” he continues.

The lyrics triggered a street protest in Beirut by angry feminist activists, fueled Syrian women’s rights advocates to lobby local radio stations to take the song off the air, and upped discussions on the issue of allegedly “sexist” songs on Lebanese TV channels.

“The song that came out irritated me,” Abi Karam told Babylon & Beyond while emphasizing that Metlak Mesh Ayzin is not targeting Iskander in particular but rather the genre as a whole. “Why this attack on girls”? I have more than 600 songs and not once in any of them did I talk to women from above,” he said.

Abi Karam thinks songs like that of Iskander embody the fear of some men of educated and career-driven women.

“This is not strength, this is weakness. They’re scared of women’s strength.This guy lives in an area where they behave like this but he shouldn’t [impose] this view on people,” he said.

Lyrics aside, the music video of Jumhoriyet Albi has also raised some eyebrows. The clip appears to show a father on a farm who’s worried about his daughter’s eagerness to work. Afraid that she will be sexually harassed by her manager at work and that her future children may be mistreated by foreign domestic workers, he urges her to stay at home and vows that she will be supported financially. Toward the end of the video clip, the daughter is seen sitting in a brand new Mercedes that is wrapped in a giant red bow smilingly waving a credit card.

Abi Karam raises particular concern over the amount of violence in the video. The clip shows the father loading his gun and supposedly putting it into the mouth of a manager who sexually harassed his secretary (thinking that this could be happening to his daughter), gagging the man, and throwing a paper box over his head.

As for Metlak Mesh Ayzin, it calls on women to stand up for themselves and not buy into claims by their husbands that they should stay at home to “protect” themselves from mean harassers and the tough outside world.

“I have status, I have work and I’m up to the responsibility. Not a hundred managers can give me that indecent look,” sings Matar. “Enough pretending that … you are concerned about me. This is weakness and selfishness,” she continues.

The song has been hailed by feminist activists in Lebanon while others think the recent campaigns against what some call the “patriarchal music industry” are much do about nothing.

Abi Karam, however, thinks the issue is important to address and vows to counter every sexist song that is released in the country.

“I want to answer every song that comes out against women,” he said. LAT