Forecast for Lebanon: Cloudy Days Ahead

by Ghassan Karam
2137
By Ghassan Karam The Arab world was abuzz with the news about the “historic” summit that took place in Lebanon last week featuring King Abdullah of Saudi Arabia, President Assad of Syria and President Suleiman of Lebanon.
Share: 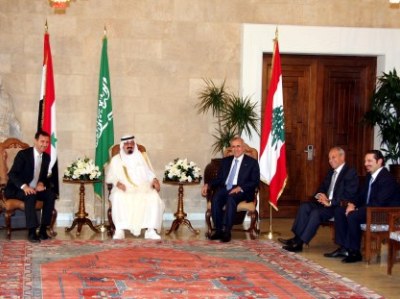 The Arab world was abuzz with the news about the “historic” summit that took place in Lebanon last week featuring King Abdullah of Saudi Arabia, President Assad of Syria and President Suleiman of Lebanon.  Many news outlets, especially the state controlled ones in Syria and Saudi Arabia, trumpeted the achievement of this meeting in the most glorious terms imaginable: “We have only dreamt about this day, thank God that we are alive to witness this moment” and Lebanon is “a strong model of the Phoenix” the bird in Egyptian mythology that rose from the ashes.

Such heroic words and great expectations described a 4 hour summit of dubious accomplishments at best.  This was more of a public relations effort than an urgent summit. The only item on the agenda, if one can call it that, was for the visitors to send messages to their supporters in Lebanon that the expected indictments from the Special Tribunal for Lebanon (STL) need not cause the feared civil strife in the country.

It is rather bizarre when the only way to avoid social tension among various groups in a state is to accept to host a hurriedly put together visit of leaders of other states who are expected to influence the competing local parties to deescalate the potential confrontation over what is essentially a domestic issue. That does not speak very highly of allegiance, independence or even the quality of domestic leadership.

So what was the burning issue behind this summit? Ultimately the host and the two visitors were being asked to make their positions clear regarding the concept of the rule of law. And this is the rub. Lebanon, a state that has been moving from one crisis of governance to another ever since its modern establishment as a state more than sixty years ago has always had democratic aspirations that have never been allowed to take hold as a result of its discriminatory confessional political structure that rests on political feudalism. As a result the democratic institutions have been confined to the shallow, weak and ineffective. Simply put, an independent, strong and respected judiciary has not been allowed to flourish.

Paradoxically, the two visiting summiteers were not well qualified to give guidance about what is essentially a rule of law issue. Saudi Arabia is arguably one of the 3-4 absolute monarchies in the world while Syria has been governed for over forty years by one of the world’s strongest authoritarian family rulers.  As the above makes clear, in the same way that one does not have the right to expect effective advice on how to fix an internal combustion engine by seeking the help of, say, a carpenter or a physician no one should be surprised if the visiting summiteers in Lebanon failed to offer meaningful advice on how to handle a judicial matter.

It would be instructive to be reminded of a popular description of the rule of law and the role of an independent judiciary stated by Plato more than 2500 years ago:

“Where the law is subject to some other authority and has none of its own, the collapse of the state, in my view, is not far off; but if law is the master of the government and the government is its slave, then the situation is full of promise and men enjoy all the blessings that the gods shower on a state.”

Only a society that is structured to operate as “a government of law and not a government of men” can offer the required foundation for democracy, personal freedom and respect for human rights. Obviously, none of these are attributes of absolute monarchies and one man rule. It is also helpful to recall that the onset of limits on absolute monarchs began almost 800 years ago with the Magna Carta.

King Abdullah and President Assad have come and gone, but the problem that they intended to address still festers. Actually, the positions of the two opposing groups in Lebanon are now as far away as they have always been, thanks to the uncoordinated messages sent by the two visitors. The Syrian president emphasized the need to discredit the STL while the king promised that he would try to delay the release of the indictment. They were able to divert, momentarily, the attention of the major parties for a day or two but now the domestic situation is back to where it was prior to the visit; and that, sadly, is to be expected. None of the principals; the king of Saudi Arabia, the president of Syria and the Lebanese president; is in a position to act as what they are not: leaders of regimes that are based on the principle of the rule of law.

Lebanon formally asked the United Nations to help investigate soon after the horrific explosion of 2005 in which former Prime Minister Rafic Hariri and 22 other people perished. This was later followed by a Lebanese request to establish a Special Tribunal to carry on the investigation and hold trials of the accused. The United Nations, in cooperation with Lebanese officials; established the STL in 2007 under a chapter 7 resolution of the Security Council. The chief investigator under the United Nations International Independent Investigation Commission (UNIIIC) became the prosecutor of the STL that is now headquartered in the Netherlands. It has adopted a voluminous set of documents that deal with all aspects needed for the smooth functioning of a judicial system. The STL has detailed descriptions of the rights of the accused, how the defense is to operate, the functions of the prosecutor and the type of trial.

Ever since it became known (but never officially confirmed) that the STL might be issuing its first indictments within the next few months against individuals closely connected to Hezbollah, all hell broke loose in Lebanon. Sayed Hassan Nasrallah of Hezbollah has already devoted two speeches to this matter and will be giving a third on August 3, 2010. No doubt Sayed Nasrallah has the right to object to the potential indictments by waging a fierce legal defense of his party. But that is not what he is doing. He has set the stage for civil strife by suggesting clearly that the court is an “Israeli” court and that the indictments are fabricated to discredit the resistance.

That is the reason for the current conundrum. Hezbollah happens to have a very well trained and equipped armed wing that is much stronger than the Lebanese army and its Internal Security Forces combined. The level of rhetoric by Sayed Nasrallh is very strident. He will accept nothing less than the complete rejection of the indictment; he threatens that if the Prosecutor is to issue the indictments, then Hezbollah will have no choice but to fight for its survival. This can only mean that Hezbollah will resort to force to make its point.  Since they are by far the strongest military force in the country this action amounts to blackmail and the hijacking of the country. If Hezbollah is to use force, then many of the other political groups will feel justified in resisting such force which could drag the country back into the throes of a civil war. It seems very clear that the logical theoretical solution to the pending Lebanese crisis is for all parties to deescalate the rhetoric, await the STL indictments, carry out a trial and rule on the culpability of the accused. All parties in a civilized society would be expected to accept the final judicial rulings and then to move on.

Alas, the problem confronting Lebanon rests on whether there is a commitment to the rule of law. If Hezbollah is right that some of its members are to be indicted and if the party is certain that these members are not guilty, then armed intervention is not the solution, legal defense is. However, Hezbollah cannot be expected to behave as it is not. It is a political movement based on a strong, theocratic interpretation with no room for secular law. Hezbollah must be made to understand that to defend its position through the use of force instead of the judicial system is actually counterproductive.  There is no doubt that Hezbollah would win the immediate military battle but it would lose the war. There is only one fair, just and honorable way out: let the judicial system have its say.

Written for and posted on mepei.com