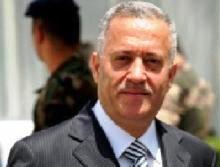 Brigadier General Wafiq Shoucair sent a letter on Monday to Interior Minister Ziad Baroud asking he be relieved of his duties as head of security at Rafik Hariri International Airport, the National News Agency (NNA) reported.

His resignation comes after the body of a 20 year old Lebanese from was found Saturday on the landing gear of the Saudi jet aircraft .

Nas Air flight XY 720 took off from Beirut airport late Friday with 130 people on board and landed Saturday morning in the Saudi capital.

The person was officially identified by Justice Minister Ibrahim Najjar as Firas Haider . He lived in Burj el Barajnet near the airport , which explains the reason behind his ability to infiltrate the airport runways. Haider reportedly was suffering from psychological and mental disorders. His body was not distorted and had 2 cigarette butts in his ear , probably to avoid the noise of the aircraft. The investigation is continuing and DNA tests are being performed .

Lebanon Files has reported that MP Khaled Zahrman branded the incident a “scandal” and called for an immediate , serious and transparent investigation to identify all those responsible, noting that the airport should have in place strong measures that will prevent illegal access to the aircraft.

He added: “This unprecedented incident is a real scandal in the strict sense of the word, which means there was some deficiency in providing airport security”pointing out that the security of the runway and the aircraft should be a top priority for all airport security personnel.

Zahrman wondered: How could the passengers and flight attendants on Nas Air plane see the man running towards the aircraft ,while those in charge of monitoring airport security were unable to see him? How did this man in the first place get to the runway and where was the airport security? He added: Why didn’t the pilot stop when he was informed about the matter..

Lebanon First bloc MP Khaled Zahraman said over the weekend that the incident shows serious flaws in airport security, and on Monday, Change and Reform bloc MP Nabil Nicolas claimed the airport is a mess.

Shoucair or Shoukairis the same man who may be the reason behind the May 7, 2008 uprising by Hezbollah. Progressive Socialist Party MP Walid Jumblatt found out Late April, early May 2008 that Shoucair on orders from Hezbollah had surveillance cameras placed near the airport to monitor Beirut’s Rafik Hariri International Airport. Following the discovery he demanded Shoucair’s resignation and accused him of being a Hezbollah member. Few days later Hezbollah occupied west Beirut and tried but failed to occupy the Druze stronghold of Mt. Lebanon. Hundreds of people were killed during the uprising.

Several ant-Syrian Lebanese were assassinated immediately after arriving from overseas trips despite the fact that their travel plans were secretly guarded. Shoucair was accused of being the person who fed the information about the slain Lebanese to the assassins.