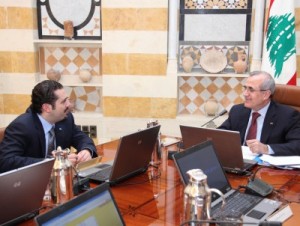 The ministers expressed regret over the anti-UNIFIL protests in the South and affirmed their desire to maintain UNIFIL’s safety and good relations with residents in its areas of operations.

The cabinet also affirmed UNIFIL’s role in protecting Lebanon’s interests, sovereignty and stability on the basis of UN Security Council Resolution 1701 and agreed upon rules.

PM Hariri also brought up the “the necessity of not stirring up important issues via leaks to the media, but raising them in the cabinet in order to take the necessary procedures.” This was in reference to the leaks on the ALFA employee who was arrested over spying for Israel

The ministers also discussed the deal reached between the Education Ministry and the UNION of secondary public school teachers.

the issue of Palestinian civil rights had come up in the session, but decided to leave this matter to the parliament.

President Michel Suleiman briefed the cabinet on his meetings with Qatari and Bahraini leaders in June, while Hariri briefed the ministers on his recent meeting with French President Nicolas Sarkozy.

Both Hariri and Suleiman said that administrative appointments should be decided without delay.