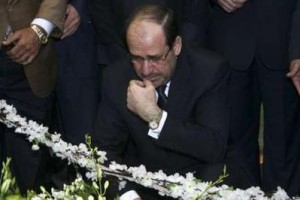 Iraq’s prime minister is in Beirut to pay his respects for Lebanon’s late top Shiite cleric.

Grand Ayatollah Mohammed Hussein Fadlallah was one of the founders of Iraqi Prime Minister Nouri al-Maliki’s Dawa party. He was also believed to be the party’s religious guide until his death on Sunday following a long illness.

A 100-member Iraqi delegation took part in his funeral south of Beirut on Tuesday that drew tens of thousands of mourners.

Al-Maliki rarely travels outside Iraq. After landing in Beirut, he headed straight from the airport to the mosque where Fadallah was buried.

The 75-year-old cleric was one of Shiite Islam’s highest and most revered religious authorities with a following that stretched beyond Lebanon’s borders to Iraq, the Gulf and as far away as central Asia.

Iraq’s former Prime Minister and head of the Iraqiya coalition Iyad Allawi is also  in Beirut to pay his respects for Lebanon’s late top Shiite cleric.

Maliki in turn thanked Suleiman for Lebanon’s support of Iraq and said his country was willing to help Lebanon on matters related to oil exploration, the statement said.

The Iraqi PM also also said he hoped Lebanese companies would contribute to enhancing investment in Iraq, the statement added.