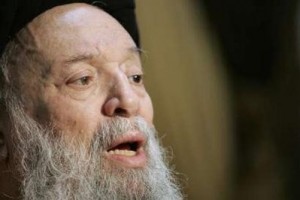 Residents in the South of Lebanon are grieving over the loss of Lebanon’s leading Shiite cleric Grand Ayatollah Mohammad Hussein Fadlallah.

Mosques are broadcasting Qur’an readings to mark the cleric’s passing, and black flags have been put up along main roads. Signs mourning his death are also posted at village entrances,the local media reported

Fadallah died on Sunday in Beirut’s Bahman hospital after being admitted for internal bleeding on Friday. He was 75-years-old.

Hezbollah’s media department is also distributing signs and banners to commemorate Fadlallah. Delegations of religious, social, and political figures are arriving in Beirut’s southern suburbs to pay their respects at the Hassanein mosque, the local media reported

Fadlallah’s funeral procession will begin at his home in Haret Hreik at 1:30 p.m. on Tuesday, according to Al-Manar television.

In a statement issued Sunday, Hezbollah Secretary General Sayyed Hassan Nasrallah mourned the passing of Lebanon’s top Shiite cleric, saying he “taught us to be people of dialogue with the other, and to reject repression and resist occupation.”

Fadallah’s legacy of thought, compassion, and strength will “remain with us as a strong guide and motivation for renewed hard work and continual jihad,” Nasrallah added.

The Hezbollah leader recounted Fadlallah’s scholarly and leadership qualities, calling him a “beneficent father and a wise guide … for all of the believing, fighting, and resisting generation since we were youths praying in his assembly and learning beneath his pulpit.”

In a statement issued Sunday, the Amal Movement mourned the passing of Lebanon’s top Shiite cleric, praising him for his eloquence, juristic knowledge, and courage.

It offered condolences to his family and all those who admired him and followed his leadership.

Amal chief, Lebanese Speaker Nabih Berri presented his condolences to “the Arab and Islamic world, Lebanese people, Muslims in particular, and the citizens of Jabal Amel over the death of Grand Ayatollah Mohammad Hussein Fadlallah”.

Authorities in Shiite holy city of Najaf, Iraq ( where Fadlallah was born and lived till the age 30) announced 3 days of mourning for Lebanon’s top Shiite cleric.

Lebanon’s former PM Salim Hoss said:” Fadlallah’s absence is a loss for Muslims and the Lebanese.”