Prince Walid: I Have full confidence in Lebanon’s future 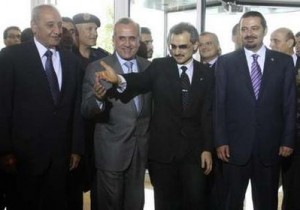 During the opening ceremonies of the Four Seasons hotel in downtown Beirut on Tuesday, Saudi Prince Walid bin Talal reiterated his commitment to support Lebanon, saying he has “confidence in Lebanon’s future.”

The opening of the hotel was held under the patronage of President Michel Suleiman, during which the president, Prime Minister Saad Hariri and Speaker Nabih Berri attended the event.

The prince, a member of the Saudi Royal Family is the grandson of Lebanon’s former first PM Riad el Solh.

As of March 2010, his net worth is estimated at US$19.4 billion, up from $13.3 billion, according to Forbes, making him the 19th richest person in the world on their list published in March 2010. He has been nicknamed by Time magazine as the Arabian Warren Buffett.