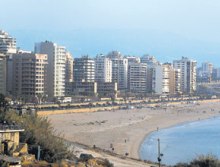 By Seda Sezer and Massoud A. Derhally

“Out of each 100 dollars spent on property acquisition, not more than 16 to 18 dollars are financed by banks,” Andary said in an interview in Istanbul today. “The rest is hard cash, mainly from Lebanese from abroad. We have no fear from a housing bubble.”

Real-estate transactions in Lebanon more than doubled in value in the first quarter, to $2.1 billion, from a year earlier, Banque Audi SAL-Audi Saradar Group SAL said in a report last month. The number of transactions climbed 41 percent to 22,059, the bank said.

Banks kept interest rates on deposits in Lebanese pounds at about 7 percent, while rates elsewhere in the world tumbled. The inflow of funds enabled commercial banks to finance the fiscal deficit, estimated at 10.7 percent of gross domestic product this year; the central bank was able to reduce reserve requirements on lending for housing, health care, education, environmental projects and start-up businesses.