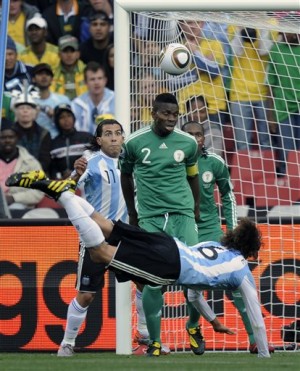 Gabriel Heinze scored on a diving header and Argentina hung on for a 1-0 victory over Nigeria on Saturday despite missing a fistful of scoring chances in the teams’ World Cup opener.

Heinze’s goal came in the sixth minute, when he took advantage of weak defense to power in a shot from 12 yards off Juan Sebastian Veron’s corner kick.

The Nigerians struggled for much of the match to contain Argentina forward Lionel Messi, who tormented them with his masterful moves.

Critics say he rarely plays well for his country, but Messi — FIFA’s World Player of the Year — posed an immediate threat to the Nigerians.

Enyeama then leapt to thwart Messi after he cut in from the sideline and fired a curling strike.

“We’re not going to kill ourselves. We have two more games to play.” Enyeama said. “We thank God the score was a little encouraging.”

The Argentines almost paid for their squandered chances, as the Nigerians gained confidence in the second half.

Taye Taiwo came within inches of an equalizer with a low shot that flew just past Sergio Romero’s left post, and substitute Kalu Uche then scooped a weak shot over the crossbar from inside the box with eight minutes left.

“Of course, I’m very disappointed,” said Nigeria coach Lars Lagerback. “Unfortunately, there was a mistake from our side that created the corner kick. We were sleeping on one of the corners and that was enough. We were punished this time.”

Argentine coach Diego Maradona prowled the sideline throughout the match, with hands clasped behind his back. For the first time as Argentina coach, the former captain wore a suit — a stark contrast to the image of him hurling himself, tracksuited, into a puddle on the field when Argentina beat Peru last year.