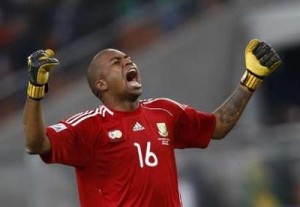 South Africa sends the host nation’s fans into a frenzy when winger Siphiwe Tshabalala gives the team a 1-0 lead against Mexico in the 55th minute in the World Cup’s opening match.

A good passing move in midfield by South Africa led to Tshabalala breaking free down the left wing. He surged forward and was left one-on-one with the Mexico goalkeeper. The stadium erupted into cheers and the vuvuzelas reached record volume when his high shot landed in the net.

Mexico, after a bright first half, picked up the pace again, but had not been able to break through the South Africa defense by the 75th.