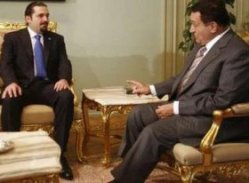 The National News Agency said the meeting took place at 10:00 am at the Red Seat resort.

Hariri informed Mubarak about the results of his latest visit to the U.S., NNA said.