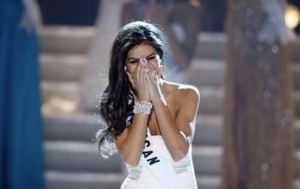 I have been shocked extensively since Lebanese-American beauty, Rima Fakih, won the Miss USA 2010 pageant last week. However, the only thing that wasn’t shocking about the whole thing was that Fakih actually was the winner, not just because I personally see her as an absolute stunner, but because I believe in the openness, meritocracy and true democratic system which exists in the United States of America.

After all, when a system allows a relatively young African-American who has a Muslim father to become the President of the country based on nothing except his merits and the votes he got then it is certainly not surprising that a young American from Lebanese Shiite roots could become the country’s beauty queen, again based on nothing except her merits and votes she got.

Yet, what I found disgustingly appalling are some of things that have been said since Fakih took the title last week.

First of all, there are those conspiracies about Muslims running the show behind closed doors in America: All I can say is — I just wish this was true, I mean we could really do with a lobby that is as powerful as AIPAC or the National Rifle Association but the fact is both Arabs and Muslims immigrants are just not as organized and they are also divided by many social and political factors. After that, there seemed to be a funny state of shock among many Americans, having feasted their eyes perhaps for the first time on so much ‘uncovered’ Arabian beauty.

To be fair, I don’t blame them — the Western media generally doesn’t cover the ‘average Joes’ of the Arab world and almost always prefers the angry faces of extremist men and veiled women.

Few journalists head to the beach resorts and night clubs of Beirut to see first hand how ‘liberal’ things are and prefer to shoot areas controlled by religious groups (but then again for one country to have such a contrast isn’t unique to Lebanon, in a way it is very similar to the difference between the Mormon controlled Salt Lake City and neighboring Las Vegas, which isn’t as conservative to say the least ).

After that came that whole saga about Fakih having participated in a pole-dancing competition back in high school. This was supported by pictures of her ‘in action’ at an event which was held back in 2007. Well, to start with, I have to say that my first impression upon seeing the pictures was ‘wow — those are fantastically-toned thighs!’. But I really don’t get what the big deal is. I mean: didn’t we all do all sorts of crazy things back in high school? (except me — I was quite a nerd).

In fact, what Fakih did doesn’t even qualify to be labeled as ‘crazy’ compared to what George W. Bush did in his early school days (and he got elected as American President, twice). Besides, in the picture she appears in a top and shorts; so one must ask, did she strip completely or not? was she a professional pole-dancer or was it only a one-off ‘high school’ experience?

Fakih claims she didn’t strip fully and that the whole thing was part of a promotional event. And to be completely fair: it is clear that the girl can work more than a pole, particularly that Fakih also graduated from the University of Michigan-Dearborn, with degrees in economics and business management, and plans to attend law school after her year-long reign. But the real question is: is this really an issue?

After all, she won Miss USA not America’s Top Nun, Taliban’s Got Talent or Hezbollah Idol. Speaking of Hezbollah — let’s get things straight, just because she is a Shiite originating from the South of Lebanon that doesn’t make her necessary related to this militant group (obviously, not all Lebanese Shiites are Hezbollah members).

Even if it is proven that some distant cousins or family members are members of this ideological Iranian-backed party — is it fair to judge her based on what someone else did? What would that say about the American Dream? Isn’t coming to the ‘land of opportunities’ all about the irrelevance of who you were back home and all about what you do and how hard you work once setting foot on US soil — or are Arabs and Muslims excluded from this ‘deal’?

Let us assume that the current Miss USA was an Italian-American and her great grandfather’s brother in law’s uncle happened to be a member of the Mafia — would we have judged her in a similar manner? I think not.

Some people would argue that it was 9-11 and other recent events justify this unwelcoming attitude. However, if this is the case then we should also ban white Americans from participating, as to many people they could resemble White America’s own terrorist, Timothy McVeigh. The list could go on: Any American from German roots could be related to Adolf Hitler. And let us not stop there, let us also ban all Americans from Japanese origins from participating as well, after all how can we live with ourselves if a future Miss America had ancestors who were traced back to a member of the Japanese Imperial Navy which attacked Pearl Harbor?

Is this the America you want? It is sad to see so much racism and double standards in a country that has such a true democratic and nondiscriminatory spirit on a constitutional, federal and legal level.

Let’s be fair – if Paris Hilton gets to avoid ‘moral crucifixion’ after her infamous intimate tape and moves on to enjoy her career in the worlds of fashion and entertainment then the same should apply for Rima Fakih, though the comparison itself isn’t fair as I think pole-dancing in shorts is more like the equivalent of appearing MTV’s The Grind in my opinion.

But this makes me wonder, if Rima Fakih was blonde, blue eyed (though very few Arabs are) and of Arab Christian roots (Yes, Christian Arabs exist!) would she have faced the same resistance to accepting her as Miss USA?

I honestly can’t answer this question on behalf of the Americans, though I know I would have been as happy for her and for America, just as many of Arabs and Arab Muslims were very happy when former Miss Lebanon Georgina Rizk won Miss Universe pageant in 1971 in Miami Beach, Flordia. By the way, Rizk went on to wed Ali Hassan Salameh, a Palestinian National with Black September, who was assassinated by Mosad in 1979.

It is worth mentioning that Rizk wasn’t stripped of her title because of her relation to Salameh. What is really ironic is that one of Ms. Fakih’s first achievements is that she managed to get both American and Muslim extremists to finally agree on something: despising her and all what she represents!

Of course, American extremists hate her for racist reasons whilst the Muslim Extremists have different incentives, namely their own religious beliefs: they would have probably liked her better if she was covered up in a ‘shadour’ in public… but I am sure they probably wouldn’t have minded the bikini and pole-dancing behind closed doors.