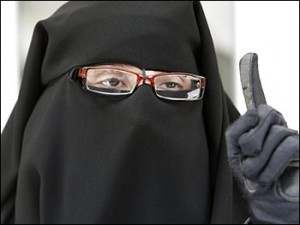 The French government decided Wednesday to impose a $185 fine on women who wear a full-face Islamic veil in public, pushing ahead with a controversial ban despite signs of tension between France’s Muslims and the Christian-tradition majority.

President Nicolas Sarkozy said his government was forwarding the legislation to parliament because it had a “moral responsibility” to uphold traditional European values in the face of an increasingly visible Muslim population, estimated at more than 5 million, the largest in Western Europe. He called the course chosen by his government “demanding” but “just,” and he said the law was not intended to stigmatize Muslims.

France is one of several Western European countries seeking to forbid the full-face veil, called the burqa in Afghanistan and the niqab in North Africa. Belgium’s Chamber of Representatives last month approved a nationwide ban, which must now be considered by the Senate. Legislators in several other countries have introduced similar bills, and the Swiss government has vowed to impose a ban administratively.

The French proposal has drawn heavy support, with up to 60 percent of those questioned in opinion polls saying restraints are necessary. But Muslims here have complained that they feel singled out for a practice that, according to an Interior Ministry estimate, concerns fewer than 2,000 women in a country of 64 million inhabitants.

The tensions boiled over Tuesday evening during a debate on the law in a Paris suburb with a large Muslim population. Members of the pro-Palestinian Sheik Yassin Movement tried to shout down the speakers, and scuffles broke out, leading to intervention by police officers who were called in by the organizers.

Last week, a woman wearing a full veil filed a legal complaint against a lawyer who she said insulted her religion in the Atlantic Coast town of Saint-Nazaire, according to local media reports. The lawyer, also a woman, filed a counter-complaint, alleging she was beaten by the veil-wearing woman, the reports said.

Mohammed Moussaoui, head of the government-approved French Council for the Muslim Religion, said recently that 15 mosques have been defaced since the beginning of the year and that Muslim tombs in two cemeteries have been vandalized. In addition, a halal butcher shop was sprayed with automatic weapons fire in Marseille, he said.

The French legislation approved by the full cabinet is scheduled to come to a vote in the National Assembly in July and in the Senate in September. Sarkozy’s conservative coalition has comfortable majorities in both houses.

The measure was expected to draw support from some political figures in the Socialist opposition as well, although the Socialist hierarchy has called for narrower legislation. A resolution condemning the full veil as contrary to the values of the French republic passed with an overwhelming majority last week.

The Constitutional Council, France’s highest constitutional court, has issued two opinions warning that the full public ban will be vulnerable to challenge in the courts as an infringement on religious freedom. It also could be challenged in the European Court of Human Rights, the council said. But Sarkozy vowed to move forward anyway, saying the government will have to deal with legal challenges as they arise.

After six months of what officials described as “pedagogy” to educate the public after the expected Senate approval, the new law would go into effect about a year from now. It would give police the right to demand that women lift their veils to identify themselves. If they refused, police could hold them for up to four hours for an identity check. If cited for wearing the veil, women would be referred to a prosecutor, who could fine them, force them to attend “citizenship classes” or both. Washington Post