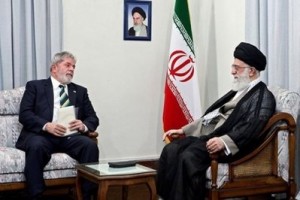 Trade between Iran and Brazil could increase nearly five-fold to some $10 billion, an Iranian official said on Sunday during a visit by Brazilian President Luiz Inacio Lula da Silva to the Islamic Republic.

The official, Behrouz Alishiri, did not give a time frame, but state radio said the projection was for annual bilateral trade to reach that level in five years’ time.

Lula is in Tehran to help mediate in a standoff over Iran’s nuclear programme, as Brazil seeks more diplomatic clout on the world stage. It is seen as probably the last chance to avoid a new round of U.N. sanctions against the major oil producer.

Analysts say Western companies are increasingly wary of investing in Iran because of the nuclear dispute and that Tehran is shifting to countries from Asia and elsewhere to develop its oil and gas fields. It has also boosted ties with Latin America.

The head of Brazil’s energy regulator said in Tehran on Saturday the two countries were likely to sign a memorandum which would open the way for Brazilian firms to participate in the modernization of Iran’s oil sector. Reuters