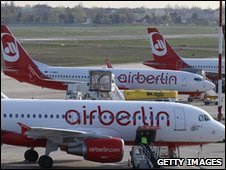 Police at Berlin’s Tegel airport are questioning two Russian speaking men with pilot licenses who were detained amid fears of an attempt to hijack a Moscow-bound jet.

A witness raised the alert after overhearing the men, who were not part of the Air Berlin flight’s crew, talking before boarding, police say.

Details of their conversation, in Russian, were not released.

The plane was evacuated and some 130 passengers questioned. Most were able to take a later flight to Moscow.

The two unarmed men, aged 49 and 26, had been booked on the midday flight and were stopped after clearing security checks.

Berlin police spokesman Michael Gassen said the witness had “had the impression that a hijacking of the plane to Moscow was planned”. BBC